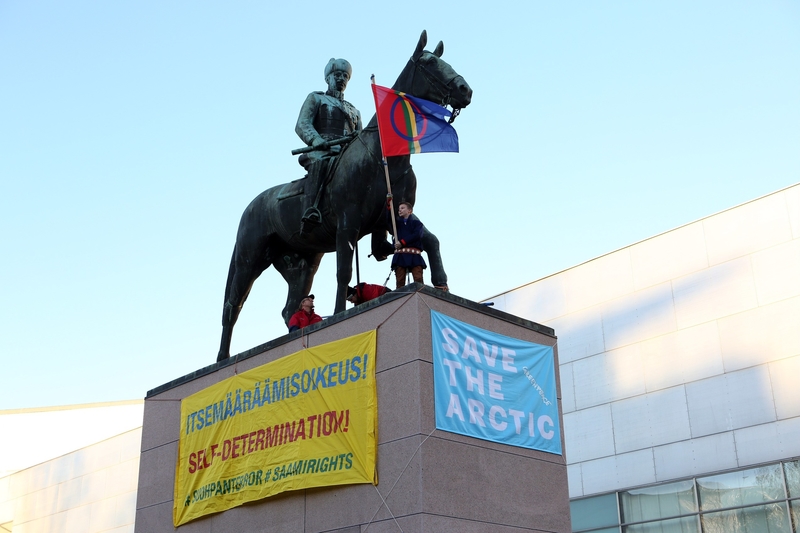 An article in a British newspaper argued that the UK is in need of its own Mannerheim (Image: Lehitkuva)

A WIDELY-READ ARTICLE published this week in the British newspaper The Telegraph attracted plenty of commentary for its comparison of WW2-era Finland to the current state of politics in the United Kingdom.

The lengthy piece, written by a prominent historian, argues that the Finnish government’s response to successive crises should serve as a role model for a post-Brexit UK, concluding that the country “needs its own General Mannerheim”.

In other news, an exhaustive study conducted by Standford University in the US has revealed that Finnish schoolchildren are among the best in the world at identifying fake news, whilst American children are among the worst. The study classed the majority of Finnish participants as “masters” at separating fact from fiction, whilst Americans were classed as “beginners”.

Meanwhile, there have been several feature pieces on the hobby horse “craze” that has swept Finland in recent years. The curious practice, which involves mostly teenage girls competing with toy horses as if they were real ones, has attracted intrigue and ridicule in equal measure.

In Jared Diamond’s fascinating, globe-hopping study of how nations cope with trauma, he argues that they do it the way individuals do, by honestly assessing their strengths and weaknesses and adapting to new circumstances. The model nation is Finland. In 1939 this poor country on the border of Russia was invaded by the USSR, a bloody conflict that ended (against the odds) in defeat yet survival.

Then, threatened by both the Nazi and Soviet war machines, the Finns took Germany’s side in a feat of diplomatic semantics: Finland never became an “ally” in Hitler’s invasion of Russia but fought alongside him as a “cobelligerent”, a distinction that sympathetic countries quietly recognised. When the British sent a bombing raid against the city of Turku, they chose to drop the bombs in the sea rather than on the Finns.

In 1945, with Germany in ruins, Finland could so easily have been absorbed into the Soviet sphere like the Baltic states. Instead, it maintained its independence and became, per capita, one of the richest, most advanced democracies in the world. How did it do it? By a frank and sensible account of the situation: its people were in a position of weakness, they couldn’t count on the West, and Russia kept invading because, like or loathe it, it had legitimate strategic concerns that the Finns had to acknowledge.

So, successive presidents took one for the team. They turned down Western aid and swallowed trade quotas from Russia; the Finnish press self-censored its criticism of Moscow; and in order to give some personal guarantee of friendship with the Soviets, the Finns emphasised stability in national leadership in order that the Kremlin would know who it was dealing with.

Why conquer Finland, concluded Stalin, when the Finnish president is already on my side? The result, argues Diamond, wasn’t just the diplomatic coup of staving off invasion from the East while still trading with the West, but also the channelling of national energies into industry, culture and education, with big economic rewards.

Brexit could either be seen as the response to a 21st-century crisis in British identity or the cause of a crisis of its own making (Remainers would argue things were perfectly fine until we turned Japanese and rejected Europe). Either way, Diamond provides food for thought. Suspending our own happiness or dread at the 2016 referendum result, the author would doubtless advise us to be honest about our position vis-à-vis the EU, for Britain is a rich country, yes, but just one; they are 27. Their markets rely on us, true, but we also import a lot of goods across the Channel. And maybe the Europeans are using the Irish border issue to extract concessions, but it’s our problem as well and cannot be wished away.

All of this points us towards the compromise of a so-called soft Brexit – Norway-style – and any wound to our national pride could be salved by accentuating the gains. Like the Finns, we could use realistic concessions to buy us time both to define our national purpose and plan for a more independent future, which is the sort of project that the Conservative Party once made its name pursuing.

Successive Tory leaders have reformed economy and society while giving the impression of continuity, even reaction, and Diamond gives several great examples of global leaders who have also juggled that paradox. Where now is Britain’s General Mannerheim? Or Willy Brandt? Or Ronald Reagan? Where are the statesmen and women who could confidently embody the nation’s traditions while also sailing it in new directions? Never has Britain been so sorely lacking half-decent politicians.

Original article appeared in The Telegraph on 04/05/19 and can be found here.

Finnish kids are better at spotting fake news than Americans

They conclude that “facilitating critical thinking as a course separate from subject area integration reveal stronger outcomes.” They also note that in a recent study (pdf) on global civic and citizenship engagement, 82% of Finnish teachers said that promoting “independent and critical thinking” was one of their most important goals, the highest percentage of any participating country.

Original article appeared in Quartz on 03/05/19 and can be found here.

Many young girls in the country have taken up the craft of “hobbyhorsing,” which sees them use a stick equipped with a toy horse’s head to dance and show off their riding skills at events, the New York Times explained in an April article.

While it may seem like the girls are simply pretending to ride their horses, it becomes as genuine as it can get at competitions, where they’ll learn how to care for their hobbyhorse just as if it were a real animal. They even pick its breed and gender.

Becoming a part of the country’s growing hobbyhorse community reportedly allows the girls to express themselves without fear of ridicule in something they may not find in school or in their neighborhood.

“The normal things, that normal girls like, they don’t feel like my things,” 11-year-old hobbyhorse enthusiast Fanny Oikarinen told the Times.

Hobbyhorsing got the attention of filmmaker Selma Vilhunen, who released a documentary in 2017 about the craft.

“Little girls are allowed to be strong and wild,” Vilhunen said of hobbyhorsing. “I think the society starts to shape them into a certain kind of quietness when they reach puberty.”

Hobbyhorsing, while having its foundation in the imaginary, has a very real effect on those who embrace it.

“I have many friends who are interested in it too, so I knew I wasn’t alone,” Fanny told the Times. “I can be as childish as I want to be.”

Original article appeared in People on 03/05/19 and can be found here.