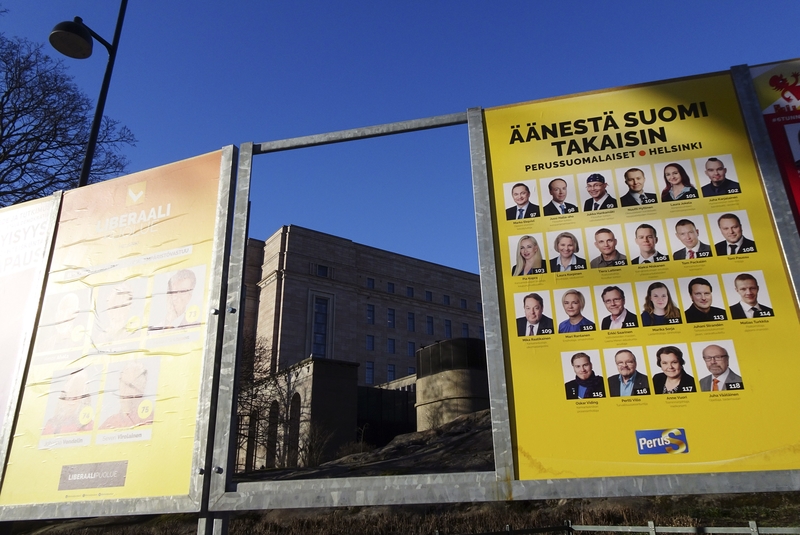 Campaign posters outside parliament on the morning after the election (image: Lehtikuva)

INTERNATIONAL COVERAGE OF FINLAND this week was dominated by the results of the national election, which saw the ruling conservative coalition lose its majority, whilst the far-right Finns Party crept up to second place.

All of the major global news outlets have offered their own analysis of the shock results, with opinions ranging from incredulity to dismay to optimism. Some outlets focused on what the results signify about the future of EU elections and the entrenchment of far-right populists on the political scene.

Meanwhile, others expressed surprise and concern at the message of ‘climate hysteria’ peddled by populist parties, as well as what the election might mean for Finland’s future in the EU.

Political pundits have also concluded that the election is indicative of the slow death of so-called ‘centrist’ politics that we’re seeing across western democracies, with major gains being made by parties on opposite ends of the political spectrum.

At first glance, it would seem social democrats — who are struggling across Europe — should be pleased that one of their parties has finally won an election.

The Social Democratic Party of Finland (SPD) will indeed be the strongest party in the country's new parliament, but with just under 18 percent of the vote, they will only get 40 of the 200 seats. That means they are far from having a majority.

They will probably lead a coalition government, however, and a Social Democrat could become Finland's next prime minister.

A closer look shows that the far-right Finns Party is only 0.2 percentage points behind the SPD, and it has 39 seats in parliament. So there is no reason to rejoice, especially not for the more liberal, established governing parties that voters have chastened in spite of economic success.

After its split and a renewed radicalization two years ago, the Finns Party has climbed back from poor opinion poll ratings.

The Finns Party's new party leader, Jussi Halla-aho, a philosopher who has previously been convicted and fined for inciting ethnic hatred and blasphemy, rallied around the issue of immigration during the campaign.

Suddenly, all immigrants became potential sexual criminals, the people of Finland were threatened by an "invasion" of Muslims. The actual figures do not back up those claims, but it was nonetheless easy to tout the mantra: "Finland first."

Six weeks ahead of the European Parliament elections, the results of the Finnish parliamentary vote point to a trend throughout the EU — more moderate governing parties are failing, opposition parties are gaining ground and far-right populists are winning at an above-average rate.

People are obviously dissatisfied with their governments; they want change even if their feelings of insecurity are not always supported by facts. In Germany and France, too, right-wing populists will probably do well in the European Parliament elections, while the establishment parties will lose out.

Italy's governing right-wing populist Lega party is on the verge of a huge increase in support. Right-wing populists already rule in Poland, Hungary and Austria, and they remain strong in opinion polls ahead of the European Parliament elections.

Original article appeared in Deutsche Welle on 15/04/19 an can be found here.

When they really wanted to rile up conservative voters this spring, the politicians from Finland’s nationalist party made a beeline for the rawest subject in this year’s general election.

No, not immigration. Climate.

As Finland’s other parties competed with each other to offer ambitious climate goals ahead of Sunday’s general election, the Finns Party has seized on climate as a new front in the culture wars, warning its conservative, working-class supporters that they are being betrayed by urban elites.

Aggressive environmental measures will “take the sausage from the mouths of laborers,” warned a Finns Party politician, Matti Putkonen, in a recent televised debate. And, more important, from dogs and cats, whose food, he said, would increase in price by 20 to 40 percent.

“What are you going to say to the little girl or boy who cries when Mom and Dad say that they can’t afford it any longer?” he said. “And take the lovable pet to be put down?”

“How long do you think,” he asked, “will it take for dogs, that is, Musti and Mirri, to learn how to switch to pulled oats?”

The anti-climate language, coupled with the party’s longstanding anti-immigrant line, has paid off. The Finns Party, which polled at just 8.1 percent last November, has risen in recent weeks to be the second most-popular party among prospective voters, with 16.3 percent support. According to Taloustutkimus, a market research firm, much of the surge has come from voters who did not take part in previous elections.

Finland’s general election has broken a well-established pattern in northern Europe, where one political cycle after another has been powerfully defined by the issue of immigration. In December, the Finnish authorities announced a series of cases involving accusations of sexual abuse and rape of girls by male asylum seekers and refugees, but it still did not become a central election issue.

Instead, much of the debate has been dominated by climate, with nearly every major party proposing its own plan to keep global warming to 1.5 degrees. The proposals have been wide-ranging and, in some cases, aggressive, like an eco-tax on meat and airfare and restrictions on logging. But this pivot did not marginalize the Finns Party, whose leaders discovered they could mobilize their electorate by casting climate policy as an elite agenda that would hurt ordinary people.

Some analysts, watching the Finns Party’s rise, have suggested that emphasizing climate has actually helped the right wing.

Original article appeared in The New York Times on 12/04/19 and can be found here.

Finland is the latest nation to show centrists the door

Prime Minister Juha Sipilä from the Centre Party had to admit massive defeat, even if he can claim some credit for lifting the Finnish economy from an unusually long recession after the financial crisis.

Sipilä quoted Jean-Claude Juncker, the president of the European Commission and former Luxembourg prime minister, saying: "We all know what to do, we just don't know how to get re-elected after we've done it."

Despite a clear improvement in economic outlook and a surge in jobs, the ruling coalition failed to finish a key reform in health care and was hurt by a public uproar on dismal care at private elderly care homes. These failures and the austere fiscal policy run by the government raised a backlash from the left.

The clear, final-hour winner of this election was the Finns Party, a populist party whose program has a strong focus on nationalism and economic conservatism. They became the second-largest party by being able to rally people who fear immigration, dislike the idea of making tiny Finland a front-runner in climate-change mitigation and distrust in traditional parties.

Like in Sweden, populism is rising despite strong economic performance and good employment. The Finns Party was split into two wings two years ago, and the more-moderate Blue Reform participated in the government coalition.

Government formation will probably take a lot of time. None of the parties gained more than one-fifth of the seats, which means that a majority requires several parties. This is not necessarily a big problem because Finnish government has traditionally been a coalition of many parties.

Original article appeared in The Hill on 17/04/19 and can be found here.

The euro area needs to create an orderly mechanism to allow members to leave the monetary union without having to quit the European Union, according to Finland’s nationalist Finns Party.

As things stand now, “the rules contain no mechanism for a controlled exit from the common currency without leaving the European Union,” party leader Jussi Halla-aho told reporters in Helsinki on Thursday. “We want such a mechanism created to ensure future crises, like the disaster in Greece, cause less damage.”

The Finnish election on Sunday ended up being the country’s tightest in six decades and left the Finns Party trailing the victors, the Social Democrats, by just one seat. The result comes after the party, whose leader Halla-aho is a convicted Islamophobe, embraced an ultra-nationalist agenda that railed against immigration.

“The permanence and eternal existence of the euro area is not sacred for us,” Halla-aho said. The cost of doing “whatever it takes” to save the euro during the debt crisis has been “extremely high” for Greece, Finland and everyone else, he said.

Halla-aho said any steps to get Finland out of the euro should be gradual. He spoke as Finnish lawmakers prepare for government formation talks after Sunday’s tight result. Antti Rinne, the leader of the Social Democrats, has said he expects consensus to be reached by May 27, after European Parliament elections.

Original article appeared in Bloomberg on 18/04/19 and can be found here.