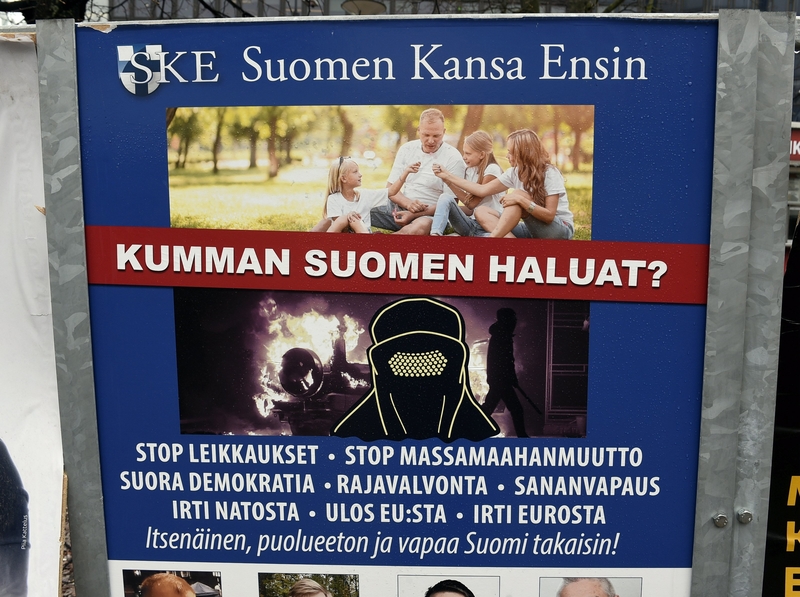 A Finns Party campaign poster from April 2019 which echoes tactics of American neo-Nazis and the far right (Image: Lehtikuva)

INTERNATIONAL NEWS OUTLETS THIS WEEK began to take notice of the recent surge in support for the far-right Finns Party, which has seen them go from sixth to second place in the polls, closely trailing the Social Democrats by just a few percentage points. One American broadsheet described the development as evidence that ‘Trumpism’ has finally gained a foothold in Finland, whilst also suggesting that Finn’s viewpoints on migration are divorced from reality.

In other news, CNN has spent the past week covering the efforts of Finnish private education providers to export their pre-schooling model abroad. Helsinki Schools International (HEI) has established seven pre-schools in China alone, with their aim being to export the Finnish style of education, which is believed to improve happiness levels.

Meanwhile, the entertainment tabloids found themselves in Rovaniemi this week, following the revelation that US reality TV star Kourtney Kardashian had travelled to Lapland to celebrate her 40th birthday with fellow TV star Scott Disick.

Finally, a number of art magazines have been covering the news that Helsinki will be getting its very own Art Biennial, in a similar vein to existing festivals in Venice, Basel, and Miami.

Trump rhetoric is taking root in the world’s happiest country

Donald Trump-style populism has spread to Finland, where the world’s happiest people are set to show their displeasure at immigration and the mainstream’s obsession with climate change in Sunday’s general election.

The Finns Party, a nationalist movement that has adopted slogans which echo the U.S. president’s “Make America Great Again,” has surged from sixth to second place in the polls.

Like in neighboring Sweden, right-wing extremists may end up depriving the traditional blocs of a majority, complicating plans for the formation of a new government just as Finland prepares to assume the rotating presidency of the European Union.

“There are various coalitions that are possible without the Finns, who aren’t especially wanted in government,” said Laura Nordstrom, a researcher at the University of Helsinki. “But if the talks become deadlocked, that could make them kingmakers.”

Discontent with the policies of incumbent Prime Minister Juha Sipila has also fueled support for the Social Democrats, who are holding on to a narrowing lead and are likely to take the first stab at forming the country’s next government. Their leader, Antti Rinne, has said he would find it difficult to work with his colleague Jussi Halla-aho, who caused the Finns to split after taking over the party’s helm in 2017. Halla-aho is a vocal critic of the EU, multiculturalism and environmentalism. The soft-spoken academic has also come under fire for inciting hatred against Islam.

Finnish opposition to immigration shot up in the wake of the 2015 refugee crisis, when the number of asylum seekers, mostly from Iraq, jumped almost nine-fold. Sipila, who famously offered his home to a fleeing family, has since became a poster child for what many say is uncontrolled immigration. Resentment at foreigners was stoked again this year following reports that several refugees had been arrested after being accused of sexually abusing children. Just 7 percent of people living in Finland were born outside the country.

“It’s a global and European phenomenon: parties that offer clear ideologies are benefiting,” said Kimmo Gronlund, a politics professor at Abo Akademi university. In Finland, immigration has been a major topic of the election campaign, and the Finns are clearly profiting from this, he said.

Original article was published in Bloomberg on 12/04/19 and can be found here.

Can happiness be exported? One Finnish school thinks so

Finland has emerged as the happiest nation in the world, and not for the first time.

The Nordic country, home to just 5.5 million people, scooped top spot in the UN's World Happiness Report -- which ranks countries by how content their citizens perceive themselves to be -- in both 2019 and 2018. Furthermore, it has consistently ranked in the top 10 -- since the first report in 2012.

Compulsory school education also begins at seven, which is late when compared with British children, who begin in the year they turn five, and the U.S., where children enroll before six.

Standardized testing does not exist in Finland and students are encouraged to explore their strengths, rather than compete, in a more relaxed environment, which education experts say can have a lifelong positive impact.

Tests, competition and ranking are all shunned by Helsinki International Schools (HEI), an institution with seven outposts in China, Australia and South Korea, which aims to make "high-quality early childhood education ... accessible for as many children as possible."

It says its concept has proved such a success that six additional branches have opened since the first one in the Inner Mongolian city of Baotou in 2017, catering for 300 children aged three to six. It is now planning new initiatives in Argentina, Saudi Arabia and Kuwait.

"We soon realized that if we could make this model work in Inner Mongolia, it would probably work anywhere," Milla Kokko, HEI Schools CEO and co-founder, told CNN.

Kokko said: "Clearly Finland has something valuable to offer people around the world." The idea is to collaborate with overseas educationalists rather than export Finnish educators, she added.

Original article appeared in CNN on 06/04/19 and can be found here.

The eldest Kardashian was in the Scandinavian country to celebrate her 40th birthday early, according to UsWeekly. Her actual birthday falls on April 18. Not only were her three kids Mason, nine, Penelope, six, and Reign, four, with her, but so was her ex Scott Disick as well as his current girlfriend Sofia Richie.

The Poosh.com creator stayed in the Arctic TreeHouse Hotel in Rovaniemi, Finland. And she posted about the modern-looking place on Sunday on her Instagram stories.

The designer of the hotel, Studio Puisto Architects, reposted the photo on their account.

Richie, 20, also shared a photo from the location, captioning it 'The North Pole.' She was seen walking out of a log caption in all black. There was also a glam shot of her indoors in a sweater and boots which could have been from the hotel.

A source told the site that Kourtney often spends time with Scott and Sofia and 'they are in a good place.' There seemed to be no sign of Kim or Khloe on the trip and it is not known if cameras for Keeping Up With The Kardashians were there.

Original article appeared in Daily Mail on 08/04/19 and can be found here.

Helsinki is getting an art biennial

In the summer of 2020, the island of Vallisaari off the shore of Helsinki, Finland, will host the first edition of the new Helsinki Biennial. Highlighting the contemporary Finnish art scene, the biennial will be directed by Helsinki Art Museum director, Maija Tanninen-Mattila, and curated by the museum’s head curators, Pirkko Siitari and Taru Tappola.

“Helsinki is an open, welcoming city, which the Helsinki Biennial will mirror,” Tanninen-Mattila said in a release. On the decision to host the event on Vallisaari, she added, “we hope that this unique, informal setting will be a fruitful source of inspiration, bringing international art to locals and creating more visibility for the art produced in Finland today.”

The curatorial concept for the biennial will be announced this fall, in advance of an event scheduled to open next year on June 12 and close September 27. Helsinki mayor Jan Vapaavuori stated in the same release, “the biennial will illustrate the unique characteristic of Helsinki and the surrounding archipelago.

It also highlights our commitment to art, architecture, design and urban culture in all its forms. The biennial will open up new worlds to anyone who visits Helsinki.”

Original article appeared in Art News on 10/04/19 and can be found here.