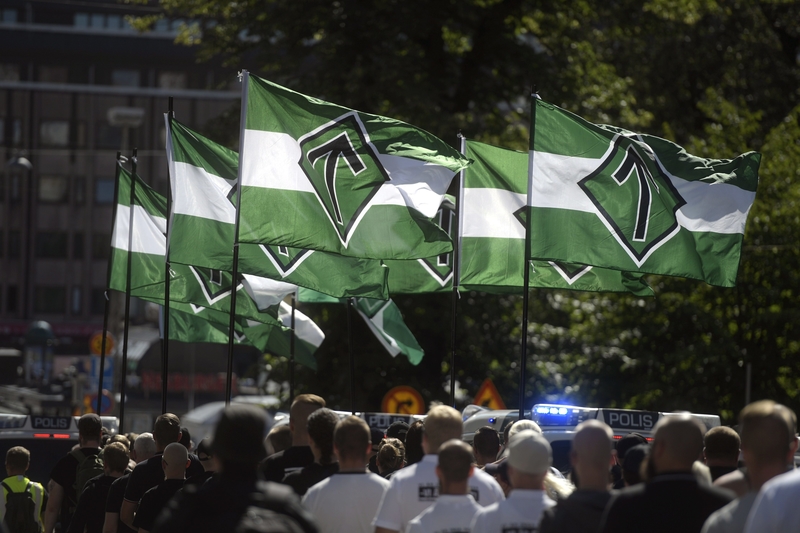 A MAJOR STORY concerning Finland in the international press this week centered on an upcoming white nationalist conference in Turku, which will host prominent hate figures and neo-Nazis from the US, Ukraine, Sweden, and Russia. The conference, known as ‘Awakening II’, will feature speakers from across the spectrum of the growing right-wing “identitarian movement” in Europe.

In attendance will be prominent online figures with alleged connections to far-right terrorists such as Norway’s Anders Breivik and the perpetrator of the recent New Zealand massacre. Anti-fascism protestors are also expected to be out in full-force this weekend.

In other news, music publications across the world have been reporting on the news that Finland will be hosting the world’s first ‘Heavy Metal Knitting Championship’ in Joensuu. Some of Finland’s most celebrated heavy metal acts will be performing for contestants, who are challenged to knit to the rhythm of their music.

Meanwhile, a British politician has written an op-ed in the Yorkshire Post about Finnish society, and how her own constituency could benefit from the Finnish way of governance. The business magazine Forbes also ran a long-read on the re-emergence of Finland’s indie gaming scene as a serious player in the global gaming industry.

White nationalists from around the world are meeting in Finland. Here’s what you need to know.

Far-right extremist groups from around the world have, for years, been quietly working behind the scenes to amplify their messaging through forging international alliances. And they’ll be building those bonds in person this weekend in Finland, at an event that underscores the growing internationalization of the white nationalist movement.

The second annual “Awakening” conference, to be held in the coastal city of Turku, comes less than a month after a shooting at two mosques in New Zealand left 50 dead. The suspected gunman, an Australian national, posted a manifesto online the day before the attack which revealed an intimate familiarity with the ideas and symbols of the modern far-right movement.

Awakening II’s speakers hail from countries including the United States, Austria, Finland, Ukraine and the Faroe Islands. Many are prominent white supremacists. Last year’s event drew a similar mix of characters, plus a Scottish alt-right YouTube vlogger called “Millennial Woes.” Lectures were aired on Red Ice TV, a far-right Sweden-based outlet that has more than 300,000 subscribers on its YouTube channel as well as its own streaming platform.

A flier for this year’s event shows a man standing on a rock, looking out at the sunrise, with the words “AWAKENING II” followed by smaller print in Finnish “This is how we will win.” It’s an exclusive affair; not just anyone can attend. Tickets are cheap, but people who want to register for the event are advised to provide the name of a referee. “All information is considered confidential and will be destroyed when not needed anymore,” the flier states.

One of the most influential and extreme groups represented will be the National Corps, a Ukranian ultranationalist far-right group with more than 10,000 members. Olena Semenyaka, the international secretary for the group’s political wing, is listed as a speaker at the conference — and she’s made no secret of her vision for the movement’s future.

‘We think globally,” Semenyaka told Radio Free Europe last December. “It’s possible for far-right leaders to come to power now and — we hope — form a coalition.” Semenyaka said that she hopes her party will spearhead those efforts.

The National Corps, including its paramilitary wing, Azov, has already apparently forged ties with some far-right groups in the United States. Prosecutors say members of the Rise Above Movement (RAM), a white supremacist fight club linked to violence in Berkeley, California, and Charlottesville, Virginia, met with Semenyaka and participated in MMA events in Ukraine in 2018.

Original article appeared in Vice News on 04/04/19 and can be found here.

Heavy metal knitting championship to launch in Finland this year

The worlds of aunties and heavy metal will finally collide in — where else — Finland this year, as the world’s first Heavy Metal Knitting Championship has been announced. The championship will go down on July 11th, 2019, in Joensuu, Finland, with a grand prize of “a hotel weekend in authentic Finnish scenery.”

“Finland is the promised land of heavy metal music,” says the official website of the contest. “There are 50 heavy metal bands per 100 000 Finnish citizens, which is astonishingly many and actually more than anywhere else in the whole world. The number of needlework enthusiasts is equally high, as according to even the most modest estimates there are hundreds of thousands of people in Finland who are immersed various kinds of needlework crafts, knitting included.

What combines them both is the great joy of creativity. When playing guitar as well as knitting stitches it is all about the pleasure of creating something cool with your hands. And – it’s all about the attitude!

“In heavy metal knitting, needlework and music become united like never before. On the same stage, accompanied by a million-dollar guitar solo, with hair flowing in the air, there’s heavy metal music and knitting, shaking hands.

Knitting to the rhythm of heavy metal music can be compared to playing air guitar – which is a Finnish way to goof around as well. In heavy metal knitting, the knitter becomes a part of the band, showing their best needlework tricks as the heavy riffs echo on the background. The knitter takes part in the jam while their balls of yarn and knitting needles swish through the air…”

To join the contest, one has to download Fight Or Die by Maniac Abductor, the official Heavy Metal Knitting Song, post a video of your most “compelling heavy metal knitting performance” to YouTube, and send it in.

Original article appeared in Kerrang on 04/04/19 and can be found here.

The future of local services and what Finland can teach us

In much of the work that I do in Westminster and in my constituency of Colne Valley, I find myself mentioning local government funding.

On the Select Committee on Education, it comes up when discussing alternative provision, support for children with special educational needs and disabilities, health and care plans, and school funding more widely.

It is because the work of local government is so widespread that the effects of the cuts have been so far-reaching. The impact has been seen across services and across our country.

We know that deprived areas have been hit the hardest, and that Labour councils are due to see falls of 28 percent on average, compared with a 19 percent fall for Conservative local authorities

But there is an alternative; it does not have to be like this. In Finland, local government has a lot of autonomy, and there is a greater level of responsibility for policy and delivery in areas such as education, healthcare, social services, planning, and infrastructure.

Decision-making is closer to the people and seeks to be responsible for their needs. In Finland, policy is geared towards commitments to provide housing where it is needed, support those who cannot care for themselves, and provide accessible low-cost childcare to families.

There are some real lessons to take forward from countries such as Finland, which could be used to inform the way local government operates in the UK.

Original article was published in The Yorkshire Post on 03/04/19 and can be found here.

Clam is the word: inside Finland’s indie game scene

Finland makes for an interesting game development setting, and that goes double for those who live outside of Helsinki. Developers like Rovio and Remedy center themselves near the capital. The three-person squad of Team Clam, makers of the upcoming comedy Clam Man, did not. “It's not necessarily a Finland problem, per se, but more of a rural problem.

It's hard to attend cons, meetups, networking events and expos when you're a small-time indie doing your first game based in the middle of nowhere,” writes Martin of Team Clan, the Finnish game developer behind the upcoming point-and-click adventure.

“People keep saying that if you have internet, you can reach out to anyone, talk to anyone, become anything - but we just come to find that in the end, networking is face-to-face interaction,” writes Martin in an email exchange.

Regardless of location, Finland offers a number of incentives that help, networking or not. National institutions help support creative start-ups, of which Team Clan was approved for. The EU does the same. These economic systems encourage risk - like making a video game about a clam fired from his office job at a mayonnaise factory. Plus, it allowed Martin to stay local, instead of moving toward Helsinki.

“That said, our taxes are pretty high, and there are certain mandatory insurances you have to have when starting a new business, which can make development tricky, especially if your game doesn't sell well immediately. Basically, our laws and policies encourage you to start a business, but because of them, it's pretty hard to maintain it successfully,” Martin writes.

That puts pressure on a small studio. For a year and a half, Clam Man crawled toward completion, due out in May of this year. It’s an oddity for sure, a comedy-based point-and-click with surreal characters. It’s pure Finland.

Original article appeared in Forbes on 01/04/19 and can be found here.