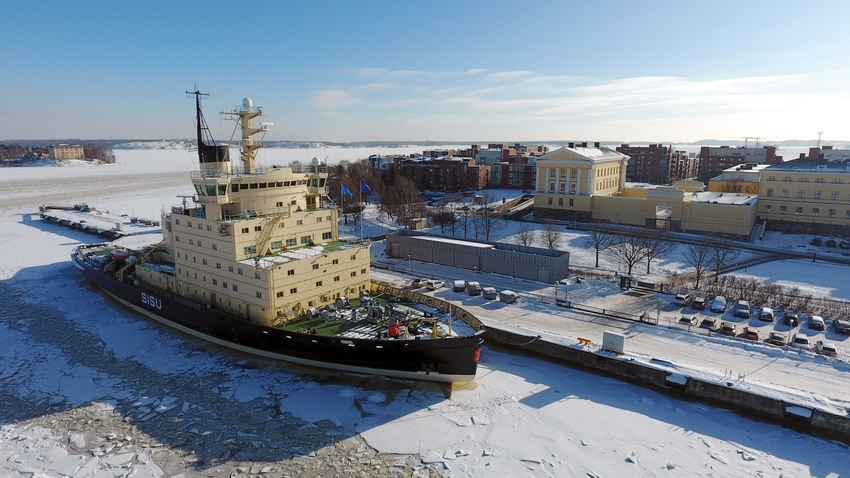 VISIT FINLAND’S LATEST PR INITIATIVE grabbed headlines around the world this week, one which promises happiness-starved travellers a chance to “rent a Finn” to show them around the country. The scheme is open to applicants from anywhere in the world,

with successful entrants being awarded an all-expenses-paid trip around the country, accompanied by a happy Finn who will show them the secret to “the Finnish way of life”.

The idea was inspired by Finland’s continued domination of the Global Happiness Rankings, which Visit Finland believes can be capitalized on to boost overseas tourism.

In other news, boat-watchers and eco-activists have been following the launch of Polaris, a gas-powered icebreaker ship which promises to be one of the most eco-friendly vessels in the world. The 128 million euro ship will be watched by the European Environment Agency and WWF over its 50-year lifespan as a potential route to environmentally-friendly shipping.

Meanwhile, the world’s largest Yiddish-language magazine ran a long-read on the revival of Judaism and Yiddish in Finland, whilst Bloomberg ran a piece making the case for Helsinki to become the next culinary capital of Europe.

Finally, research from the University of Helsinki exploring the links between migration and fertility made the splash in a number of newspapers and scientific magazines.

Finland is at it again. The country is hoping to attract more visitors this year by launching another unique tourism campaign: Rent a Finn.

The European destination already launched the “FinRelax” program in 2016 where they encouraged travelers to de-stress through a five-step, natured-focused process. And in 2018 they lured visitors by offering up dream jobs that included watching the Northern Lights. Now, they want to “save the world from stress” by pairing travelers with Finnish happiness guides and providing a free trip to Finland. The goal? Learn about true happiness and get immersed in Finnish traditions and culture.

“We want to ensure travelers can have an authentic Finnish experience, by showcasing our connection with nature with our dedicated happiness guides,” said Senior Director, International Marketing at Business Finland Heli Jimenez in a statement. “Rent a Finn will enable travelers to live the life of a Finn, from a blissful summer day foraging for food, to hiking through the forest or staying at a remote holiday cottage overlooking a secluded lake.”

Why did Visit Finland choose to focus on happiness guide? According to a UN study, Finland is the world’s happiest country due in part to its unique connection to nature.

“Many travelers choose Finland as a destination because of our serene nature and silence,” added Jimenez. “Everyman’s rights—the right of everyone in Finland to enjoy outdoor pursuits regardless of who owns or occupies an area—are fundamental to our culture and the outdoors is a natural part of our life. Children play outside regardless of the weather, and much of our free time is spent in the woods. This might be one key to our happiness, and Rent a Finn is an attempt to share this experience with the world.”

Original article appeared in Forbes on 27/02/19 and can be found here.

Aboard the icebreaker Polaris, Finland (AFP) – The steel behemoth pushes ahead, crunching the ice as it navigates the northernmost tip of the Baltic, considered one of the most polluted seas in the world. But unlike other icebreakers spewing diesel, this state-of-the-art ship boasts cleaner fuel.

In the freezing darkness of a February morning, the immense Polaris, which at 10,000 tonnes weighs more than the Eiffel Tower, ploughs effortlessly through the half-metre thick ice.

“I used to fly planes but I don’t miss it at all. In here it’s like driving a spaceship!” said second officer Valtteri Salokannel on the ship’s bridge, surrounded by satellite images of the ice and rows of coloured lights.

The bridge shakes gently but the thick windows cut out the noise of the howling winds on deck and metallic clanging of ice against the reinforced steel hull.

The 128 million-euro (USD145-million) vessel is tasked with keeping shipping lanes open for up to six months of the year, allowing a constant stream of cargo ships carrying steel, paper products and chemicals in and out of the ports serving northern Finland and neighbouring Sweden.

The ship’s captain, Pasi Jarvelin, boasts that Polaris is the most eco-friendly icebreaker in the world.

Polaris’ eco-friendlier credentials will be of increasing importance during the ship’s 50-year lifespan, as the region’s pristine white ice hides waters that have been singled out by the European Commission and WWF, among other international bodies, as in urgent need of action to reduce high levels of pollution.

Original article appeared in The Borneo Bulletin on 27/02/19 and can be found here.

In Finland, a Yiddish resurgence

I had been invited to this year’s Limud Conference Helsinki to give three talks about Yiddish. (In Finnish Limud is spelled with one “m” instead of the double “m” spelling used for Limmud in English.) Co-organizer Ariel Nadbornik told me that although most Finnish Jews don’t speak Yiddish they feel a definite connection to the language. “Every time we offer a talk about Yiddish, the room is packed,” he said.

The Jewish community of Finland numbers about 1,500, of whom 1,200 live in Helsinki. The history of the Jews in Finland is fascinating. It begins with the sad story of the Cantonists, Jewish boys who were snatched off the streets of Czarist Russia between the 17th and 19th centuries and conscripted to military institutions for 25 years, with the intention that they adopt Christianity. After being discharged, the Russian authorities permitted them to settle in Finland, where a number of them eventually re-embraced their Jewish roots and built a community.

In the 1920s and 30s, the National Library of Finland became a repository for Yiddish books published in the last decades of the Russian Empire and in the Soviet Union. The Jewish community also had an active Yiddish theater.

Although the number of worshippers was modest, the singing of kaboles shabes, the welcoming of the Sabbath, was spirited, and accompanied by skillful harmonizing. Many sang with an Israeli accent, either because they were Israeli-born or because they had studied Jewish subjects from Israelis. Finland is geographically close to Israel — they’re even in the same time zone — so Israelis and Finnish Jews travel back and forth frequently.

Original article appeared in Forward on 28/02/19 and can be found here.

The eateries so chill, they hang Michelin stars in the bathroom

On Feb. 19, Michelin released the 2019 edition of its Nordic Cities Guide. Predictably, the headlines focused on Noma regaining two stars after a yearlong reinvention. Stockholm added a two-star restaurant, Gastrologik, cementing its culinary destination cred. Helsinki, meanwhile, added a new starred restaurant to bump its total up to six, but still hasn’t registered on the general food-snob radar. Which makes now the perfect opportunity to capitalize on the city’s burgeoning dining scene, but without the price hikes and reservation rushes that typically follow Michelin notoriety.

It hasn’t always been this way.

From 2003 until it closed in 2013, the Finnish capital’s legendary Chez Dominique, a high-end, modern, French-inspired restaurant of the white-tablecloth variety, held two Michelin stars, longer than any other place in the region. Not until 2016 did Copenhagen’s Geranium and Oslo’s Maaemo join the three-star club. Noma’s Nordic-cuisine hype and Michelin’s focus on the region with a dedicated guide happened after Helsinki exited the stage.

The result: Helsinki’s best restaurants have tables available pretty much any time you want them, a notable contrast to, say, Sweden’s Faviken Magasinet, whose reservations book up within seconds of becoming available. Helsinki’s new generation of chef-owners is also cooking with a chip on the shoulder, aware that Finnish spots don’t get the recognition their neighbors do. But they’re also wary of repeating the mistakes that torpedoed Chez Dominique, particularly relying on tourist traffic to fill tables.

Original article appeared in Bloomberg on 23/02//19 and can be found here.

Migrants face a trade-off between status and fertility

Researchers from the Universities of Helsinki, Turku, and Missouri as well as the Family Federation of Finland present the first results of a new, extraordinarily comprehensive population-wide dataset that details the lives of over 160,000 World War II evacuees in terms of integration. The results demonstrate that migrants' integration into a host community involves a trade-off between gaining increased social status and having fewer children.

Evacuees from Karelia, a region ceded by Finland to the Soviet Union during World War II, had the unfortunate fate of having to evacuate from their homes twice in the space of a few years. Evacuees fled to western Finland at the beginning of the war, but then many of them returned to their homes for two to three years when the territory was recaptured by Finland, only to have to evacuate again at the end of the war.

"This exceptional historical event provides a natural experiment that allowed us to analyse the likelihood of various social groups returning to their natal communities when offered the opportunity," explains Robert Lynch, the first author of the article from the University of Turku, Finland.

Original article appeared in Phys.org on 26/02/19 and can be found here.

Tourism Finland in the World Press