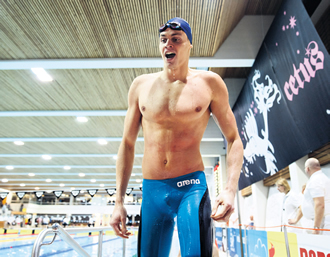 "Olympic swimmer Ari-Pekka Liukkonen has been named as Finland's sports role model of the year. 2014 was a monumental year for Liukkonen as he came out in the build up to the Winter Olympic Games in Sochi, Russia to protest the country's position on LGBT rights.

Finnish journalist Ossi Halme told Outsports: 'I think this came as a nice surprise. I was a bit unsure whether or not Liukkonen would win. He has strong merits from the pool. Then again, I wasn't sure if the jury would really understand how much of a role model it makes him that he came out during the busiest time of his career. I'm glad and somewhat relieved to see that he won.'

When Liukkonen came out, he became Finland's first openly gay elite male athlete. The 25-year-old is also the Finnish record holder in the 50m freestyle event which he competed in at the London 2012 Olympic Games and won a bronze medal in both the European and World Championships in 2014."