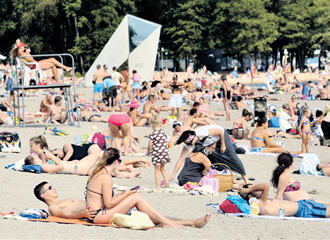 ''Finland is warming fast – faster than scientists ever predicted and at nearly twice the rate of any other country on Earth – according to new research from the University of Eastern Finland and the Finnish Meteorological Society. The researchers found that over the past 166 years Finland's average monthly temperatures increased by two degrees Celsius, whereas temperatures over the rest of the planet have increased by only .8 degrees Celsius on average.

In general, sub-Arctic countries are all warming faster than the rest of the world. This isn't surprising to some, who expect the rate of warming at the poles to increase faster than in other areas of the world. The fact that the coldest places are warming faster isn't that much of a mystery. According to ZME Science, ice acts like an insulating cover that reflects the sun and keeps the water below cold. The result is that the more ice that is lost to melting, the more the surface absorbs the heat instead of reflecting it back to space. Ice-free parts of the ocean now absorb much more heat than they used to, so when air temperatures drop in the fall and winter, the heat is released into the air, moderating the temperature and frustrating skiers everywhere...'

'You would expect that the temperatures in the north would be rising faster than the global average,' Ari Laaksonen, professor in the Department of Applied Physics at the University of Eastern Finland and a co-author of the study told Scientific American. 'But [researchers] expected a rate that was 50 per cent faster; Finland's temperature is rising by almost 100 per cent.'..."