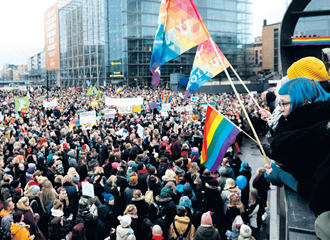 "Finland's parliament narrowly approved a bill legalising gay marriage on Friday, 28 November after months of heated debate and controversy. Yes, you read that correctly. Finland, often regarded as one of the most inclusive and progressive countries in the world, has only now approved same-sex marriage for its citizens. In the US, by contrast, 35 states have already legalised gay marriage, with same-sex marriage bans recently falling in Arkansas and Mississippi.

The vote passed with 105 votes in favor and 92 opposed, making Finland the 12th European country to allow same-sex marriage and putting it on the same legal footing as its regional peers: Denmark, Iceland, Norway, and Sweden. The announcement that the bill had passed was met with cheers of jubilation in Helsinki's Citizens' Square as a crowd of at least 5,000 people shouted 'Thank you!' towards the parliament building.

'It's a demonstration of civic activism and it's also a sign that Finnish legislation is approaching the same level as that of other Nordic and Western countries on this very delicate and difficult issue,' Finnish Prime Minister Alexander Stubb told the crowd after the vote.

Homosexuality in Finland has been legalised since 1971, though it was only formally declassified as an 'illness' in 1981, and gay couples have been able to enter into registered partnerships in the Nordic nation since 2002. Registered partnerships gave same-sex couples most marriage rights, but banned couples from adopting and taking the last name of their spouse.

The announcement to legalise same-sex marriage is being lauded as a victory for activists and marks the end to an uncharacteristically tense debate about homosexuality in Finnish society, where polls and analysts were still undecided whether the law would pass right up until Friday's vote.

Attempts to pass a bill in the past were met with stiff opposition, both in the government and in segments of civil society. Officially recognising same-sex marriages was brought to parliament by Tahdon 2013, a pro-gay rights advocacy group, after a failed attempt to submit a citizens' petition in February 2013.

Following their rejection, Tahdon 2013 gathered more than 166,000 signatures in favour of same-sex marriage and resubmitted the petition in December 2013, where it was accepted and slated for debate in parliament this [last] week."