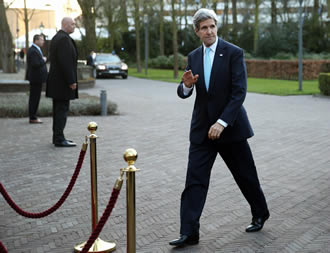 Days before Israel is supposed to release a final group of Palestinian prisoners — a key test of faith in U.S.-backed peace negotiations — Secretary of State John Kerry will travel to the region to try to keep the talks alive.

The scheduled 29 March prisoner release is the last milestone ahead of an end-of-April deadline Kerry set for a preliminary deal.

Netanyahu is under political pressure to postpone the release, which would free many long-held inmates convicted of killing Israelis. Abbas is under equal pressure to walk away from talks if Israel balks or to abandon the peace effort after the prisoners are freed.

Kerry's face-to-face meeting with Abbas is intended to "narrow the gaps between the parties," Psaki said as Kerry arrived in Rome for related meetings.

The prisoner issue has emerged as a flash point in increasingly troubled negotiations and a rallying cry for opponents on both sides.

Palestinians had agreed to suspend efforts to gain greater statehood rights through the United Nations in exchange for the prisoners. Chief negotiator Saeb Erekat, accompanying Abbas to Washington for a meeting with Obama at the White House earlier this month, refused to say what his side would do if the release is delayed or canceled.

Both Netanyahu and Abbas agreed to keep their negotiators at the table through April. With no visible signs of progress, Kerry is trying to get both sides to agree to an outline for a final peace deal.

Divisive issues such as borders of a future Palestinian state and the status of Jerusalem would be sketched out in that agreement, with details to be filled in over the following months.

In Israel, families of victims killed by those set to be released have taken to the streets in protest.

Last week, after a meeting with families of the victims, Deputy Defense Minister Danny Danon, a member of Netanyahu's Likud party, threatened to resign from the government if the release of Palestinian prisoners goes ahead.

Meanwhile, Justice Minister Tzipi Livni, who heads Israel's team in the peace negotiations, said last week that the release of these prisoners was uncertain and would be conditional on reaching a framework agreement.

Another serious sticking point is the Israeli demand and the Palestinian refusal to recognise Israel as a Jewish state, a condition stipulated in recent months by Netanyahu.

"There is a basic refusal to accept the right of Jews to establish a national state," Steinitz said. "In my opinion, we should not have even started talks without a fundamental mutual recognition. If there is no Jewish nation and no Jewish rights to a nation, then there is no reason for us to even speak."

He added: "This should be the fundamental demand of any peace process. If one side refuses to recognise the very existence or right to exist of the other side it seems like a non-starter."