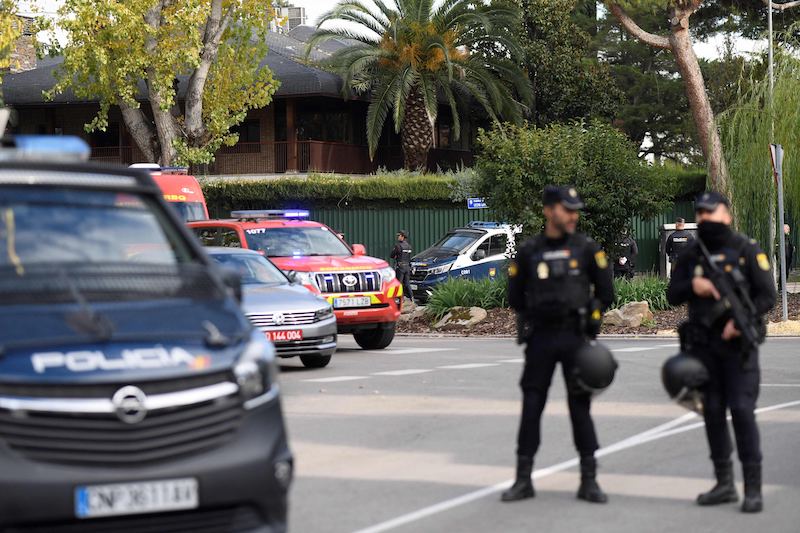 Spanish policemen secure the area after a letter bomb explosion at the Ukraine's embassy in Madrid on November 30, 2022. LEHTIKUVA / AFP

In Spain, the "bloody packages" was found with a spate of letter bombs, including one that injured a staffer at the Ukrainian Embassy in Madrid. This incident has raised suspicion about links to Russia while prompting Kyiv to ask for increased security at its overseas offices, The Washington Post reported.

Meanwhile, the Ukrainian Foreign Ministry called the "bloody packages" a "well-planned" campaign of intimidation and terror.

A Ukrainian Foreign Ministry spokesman said packages were received at embassies in the Netherlands, Poland, Croatia, Italy and Austria, as well as at consulates in Naples and Brno, in the Czech Republic.

Yevhenia Voloshchenko, a Ukrainian official in Rome, said the parcel received at her embassy contained a fish eye. Czech police said the envelope in Brno contained "animal tissue," adding that it had first been checked for explosives and prompted an evacuation of the immediate surroundings, including a kindergarten. Police said a similar package also arrived at the Ukrainian Embassy in Prague, according to The Washington Post.

Separately, the Ukrainian ambassador to the Holy See said the entrance to his apartment residence in Rome had been vandalized, with the outside stairwell, ceiling and front door smeared with a "dirty substance." An Italian police spokesman said the substance was faecal matter.

It is unclear whether the letter bombs in Spain have any connection to the other incidents across Europe. The letter bombs were received at a series of high-profile locations, including the office of Prime Minister Pedro Sanchez and the U.S. Embassy in Madrid, where the letter was disabled in a controlled detonation.

Meanwhile, Russia's embassy to Spain came out in its defence and said that it has no role in the campaign, denouncing any threat or terrorist act against a diplomatic mission as "totally condemnable."

According to The Washington Post citing Spanish news agency Europa Press on Friday said that Spain's minister of the interior had communicated with other European countries, as well as the European Commission, warning that the letters "could be related to the invasion of Ukraine by Russia."

On February 24, Russia began a special military operation in Ukraine after the Donetsk and Luhansk people's republics requested help defending themselves.

Russia has been facing immense pressure from the international community to stop its military operations in Ukraine which has created an immense humanitarian crisis with thousands of refugees from Ukraine fleeing to the neighbouring countries to the West.