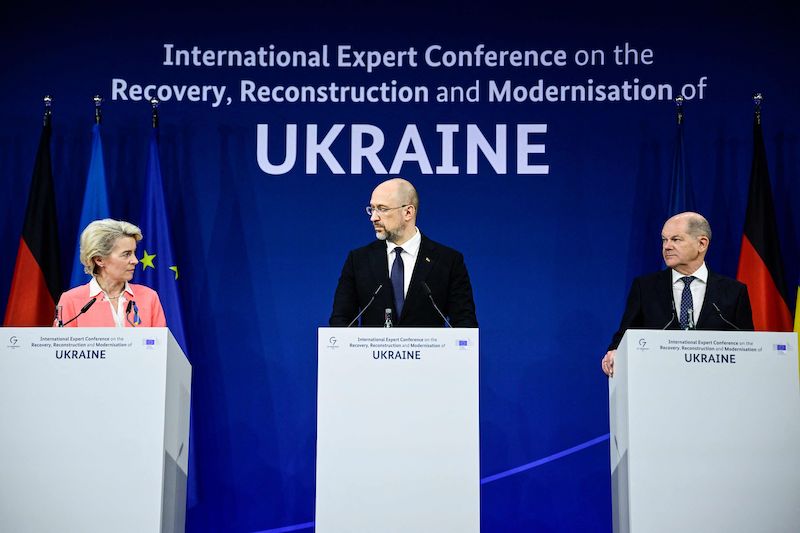 President of the European Commission Ursula von der Leyen, Prime Minister Of Ukraine Denys Shmyhal and German Chancellor Olaf Scholz address a press conference during the International Expert Conference on the Recovery, Reconstruction and Modernisation of Ukraine in Berlin on October 25, 2022. LEHTIKUVA / AFP

Reiterating solidarity towards war-ravaged Ukraine, European Union is set to propose a substantial financial package of up to EUR 1.5  billion a month to the country which would contribute to covering its financing needs for 2023.

Positive developments: we will propose this week the financial support package for Ukraine in 2023. The EU will be at Ukraine's side for as long as it takes."

This comes after EU President held talks on Sunday with Ukraine President Volodymyr Zelenskyy. The main focus of the conversation was on ensuring financial support for Ukraine in the months ahead.

President von der Leyen informed President Zelenskyy that she would this week propose a substantial financial package from the EU of up to EUR 1.5 billion a month, totalling up to EUR 18 billion, which would contribute significantly to cover Ukraine's financing needs for 2023.

Both leaders recognised the importance of ensuring predictable and regular funding of essential state functions. "The support in the form of highly concessional long-term loans, with coverage of the interest costs, would also work to support Ukraine's reforms and its path towards EU membership," the European Commission said in a statement.

President von der Leyen confirmed ongoing work by the EU to continue to provide immediate humanitarian support to Ukraine, particularly over the winter. She reiterated that the EU is in it for the long haul in its support for Ukraine.

The leaders also discussed the importance of ensuring Ukraine's agricultural exports can reach the world. In addition to full support for the UN's efforts to reach an agreement with Russia on the Black Sea Grain Initiative, the leaders also discussed plans to expand the capacities of the EU-Ukraine Solidarity Lanes, which have so far been used to transport the great majority of Ukrainian agricultural and non-agricultural exports since the start of the Russian war.

Finally, the leaders discussed strengthening sanctions, as well as the "negative role played by Iran's support for Russia's aggression" and how to respond.