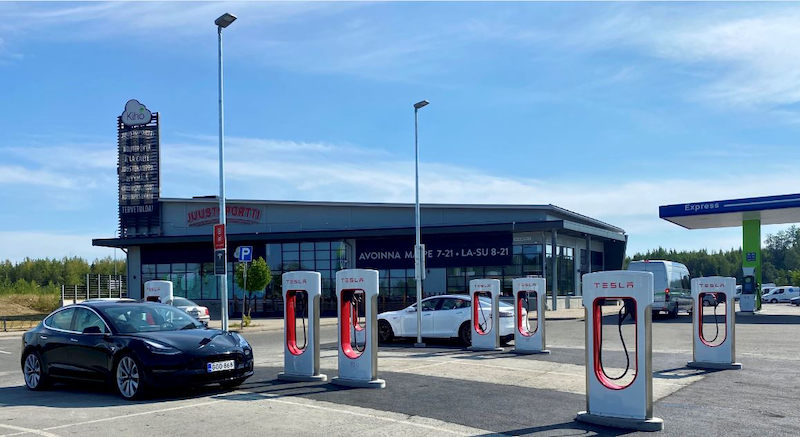 With the opening of 6 new locations with a total of 100 new stalls over the last few days, Tesla owners in Europe now have access to over 10,000 Superchargers, spread over 30 countries and nearly 900 stations. About a fifth of these stalls have been built in 2022. In fact, the network has already grown more in 2022 than any other year, with still 3 months to go. From a few 2-stall stations in 2013, to sites with dozens of chargers ranging from retail locations to hotel chains, the Supercharger network continues to stay ahead of the fast-growing EV fleet.

Located in Spain, France, Belgium and Germany, these 6 new locations offer more charging options to customers travelling across the region.

Fast and reliable, the network continues to support heavy traffic episodes despite the increased number of Tesla vehicles on the road and the opening of selected sites to non-Tesla EVs. About a third of the Tesla fleet in Europe actually used a Supercharger located outside of their home country this summer and nearly 80% used a Supercharger at least once. In spite of this, the network showed no sign of systemic congestion issues during the busiest weeks of the period.

Tesla’s Supercharger network is also the largest public fast charging network in Europe. Launched in November 2021, our Non-Tesla Supercharger pilot has continued to expand to new sites and countries to support our mission to accelerate the world’s transition to sustainable energy. It is now live in 14 markets, for a total of over 320 locations and 4.600 Superchargers.

In Finland, the Supercharger network expands rapidly. Today 19 Supercharger stations with almost 130 stalls facilitate efficient and affordable travel in most areas of the country. Recently, Tesla opened 4 stalls in Pello and since springtime Superchargers in Rovaniemi, Kuopio, Lappeenranta, Kärsämäki, Jyväskylä and Levi have opened. More than 60 percent of the stalls are now available to all EV drivers in Finland. In total, 82 Superchargers on 11 stations from the north to south are open to all EVs, which make Tesla Superchargers one of the largest public fast charging network in Finland (>150 kW).