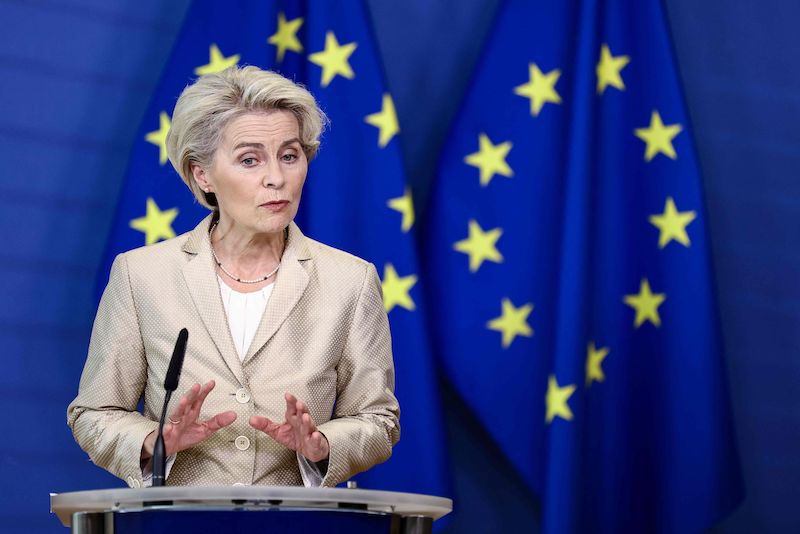 European Commission on Wednesday proposed a new package of sanctions against Russia which includes "new listing of individuals and entities as well as new trade bans on Russian products depriving the country's economy of 7 billion euros in revenues."

The announcement of fresh sanctions was done at a press conference by European Commission President Ursula von der Leyen.

"Russia has escalated the invasion of Ukraine to a new level and we are determined to make the Kremlin pay the price for this further escalation," she tweeted and mentioned sanctioning of "more products that can't be exported to Russia, in particular key technologies needed for its war machine."

Proposing a new package of "biting sanctions" against Russia, von der Leyen said that Russia should not benefit from European brainpower and expertise. EU Commission proposed "additional bans on providing European services" that include "prohibition for EU nationals to sit on governing bodies of Russian state-owned companies."

Furthermore, she said that there must be a legal basis for an oil price cap. "Some developing countries still need some Russian oil supplies, at low-prices. This cap will help reduce Russia's revenues and keep global energy markets stable."

"We are stepping up our efforts to crackdown on circumvention of sanctions.   Therefore, we are adding a new category to be able to list individuals if they circumvent our sanctions. This will have a major deterring effect," she tweeted.

Meanwhile, Russian President Vladimir Putin asserted that the purpose of the West is to weaken, divide and ultimately destroy and he had signed a decree on partial mobilization in Russia amid the ongoing war in Ukraine.

"In order to protect our homeland, its sovereignty and territorial integrity, to ensure the security of our people and people in the liberated territories, I consider it necessary to support the proposal of the Ministry of Defense and the General Staff to conduct partial mobilization in the Russian Federation," he said during nation address today, CNN reported.

Furthermore, referendums on joining Russia were held in the Donetsk and Lugansk People's Republics, as well as the Kherson and Zaporozhye regions in eastern Ukraine.

US Ambassador to the United Nations Linda Thomas-Greenfield condemned the expected referendums during a meeting with Ukrainian Foreign Minister Dmytro Kuleba and reiterated the US would not recognize any attempt by Russia to "claim annexation of Ukraine's sovereign territory."

The US, along with the G7 nations and European Union (EU) has imposed severe and immediate economic costs on Russia for its "atrocities in Ukraine, including in Bucha".