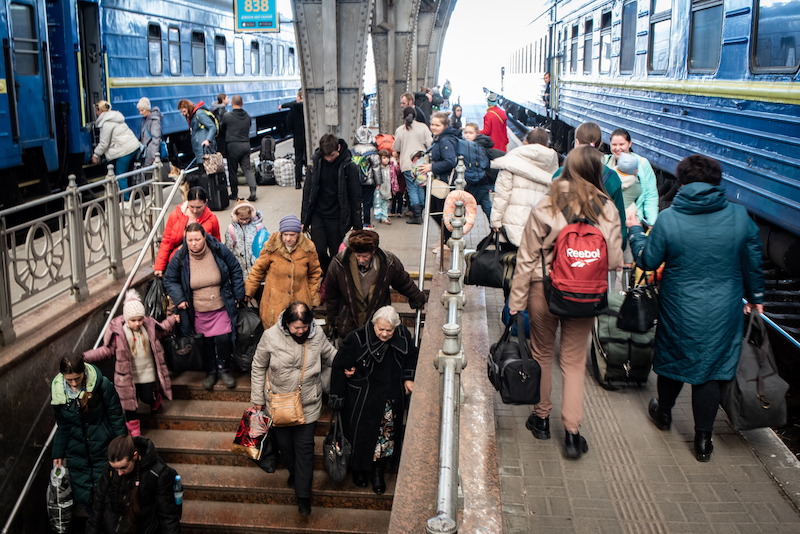 An evacuation train from the city of Kramatorsk in Donetsk Province in eastern Ukraine has just arrived at Lviv train station. Photo: Christian Jepsen/NRC

Statement by Roberto Vila-Sexto, the Norwegian Refugee Council’s (NRC) Country Director, on the approaching six-month mark of the escalation of the war in Ukraine:

“People trapped amid hostilities in the east of Ukraine continue to bear the highest cost of this war. Some communities have had no access to humanitarian assistance since February, witnessing the destruction of their property and critical infrastructure needed for survival.

“Relentless fighting continues in the Donetsk region, where the government has now ordered civilians to evacuate. Some people will remain where they are, unable or reluctant to leave their homes.

“Many might forget the war in Ukraine did not start on 24 February as people in the east have been living on the frontlines for the past eight years. Six months since the unprecedented escalation, no one should need a reminder that the armed conflict is far from over – and continues to affect millions of lives.

“Nearly 18 million people currently need assistance inside Ukraine, including almost 7 million internally displaced across the country. Their situation will further deteriorate with the onset of winter. Housing and fuel shortages will exacerbate the impact of displacement and insecurity, particularly in areas with widespread infrastructure damage.

“Although refugee returns to Ukraine have significantly increased, over 1.5 million people have also left the country in the last month alone. Access to humanitarian aid across the country and long-term support to displaced people, including those who choose to return, needs to be prioritised from now on. Investment in housing and reconstruction, as well as compensation and reparation schemes inside Ukraine must remain on the donors’ agenda to ensure the people of Ukraine remain protected amidst an uncertain future."

Nearly 1,000 boys and girls have been killed or injured in the war in Ukraine, the head of the United Nations Children's Fund (UNICEF) said adding that the actual number could be much higher.

Catherine said once again, as in all wars, the reckless decisions of adults are putting children at extreme risk. She said there are no armed operations of this kind that do not result in children being harmed.

"The use of explosive weapons has caused most of the child casualties. These weapons do not discriminate between civilian and combatant, especially when used in populated areas as has been the case in Ukraine - in Mariupol, Luhansk, Kremenchuk, and Vinnytsia. The list goes on and on.

The Russia-Ukraine war began nearly six months ago. The full scope of the Ukrainian refugee crisis is difficult to quantify and far exceeds any other refugee crisis in Europe since World War II.

The UNICEF Executive Director said most child casualties resulted from the use of explosive weapons, which "do not discriminate between civilian and combatant", especially in populated areas, as has been the case in cities such as Mariupol, Luhansk, Kremenchuk, Vinnytsia, and elsewhere.

Meanwhile, almost every child in Ukraine has been exposed to deeply distressing events. Those fleeing violence are at significant risk of family separation, abuse, sexual exploitation, further attacks, and trafficking.

The escalating hostilities have devastated the education system. UNICEF estimates that 1 in 10 schools have been damaged or destroyed.

Schools have been targeted, or used by parties to the fighting, which means families do not feel safe sending their children back to the classroom.

"All children need to be in school and learning, including children caught up in emergencies. Children in Ukraine and those displaced by this war are no exception," said Russell.

The UN Children's Fund continues to call for an immediate ceasefire.

The children and families of Ukraine have endured six months of escalating devastation and displacement.

Children continue to be killed, wounded and deeply traumatized by the violence all around them. Schools, hospitals and other civilian infrastructure on which they depend continue to be damaged or destroyed.

Multiple UN agencies say that families have been separated and lives are torn apart.