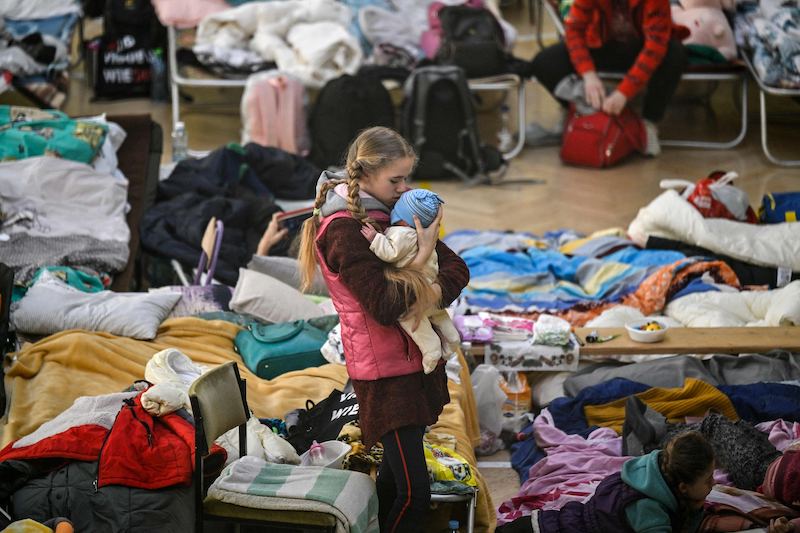 A girl holds her sibling in a temporary shelter for Ukrainian refugees in a school in Przemysl, near the Ukrainian-Polish border on March 14, 2022. LEHTIKUVA / AFP

The number of people forced to flee their homes reached 89.3 million by the end of 2021, a record high since records began, up 8 per cent year on year, the UN refugee agency (UNHCR) said on Thursday.

UNHCR said in its annual Global Trends report that this 89.3 million, well over double the figure of 10 years ago, include 27.1 million refugees, 83 percent of which are now being hosted by low- and middle-income countries,

"Every year of the last decade, the numbers have climbed," said the United Nations High Commissioner for Refugees Filippo Grandi.

UNHCR stressed in its report that last year was notable for the number of conflicts that escalated and new ones that flared: 23 countries, with a combined population of 850 million, faced medium- or high-intensity conflicts.

Meanwhile, it said, food scarcity, inflation and climate crisis are adding to people's hardship, stretching the humanitarian response just as the funding outlook in many situations appears bleak.

The report also said that by May of 2022, more than 100 million people were forcibly displaced worldwide by persecution, conflict, violence, human rights violations or events seriously disturbing public order.

"Either the international community comes together to take action to address this human tragedy, resolve conflicts and find lasting solutions, or this terrible trend will continue," Grandi warned.