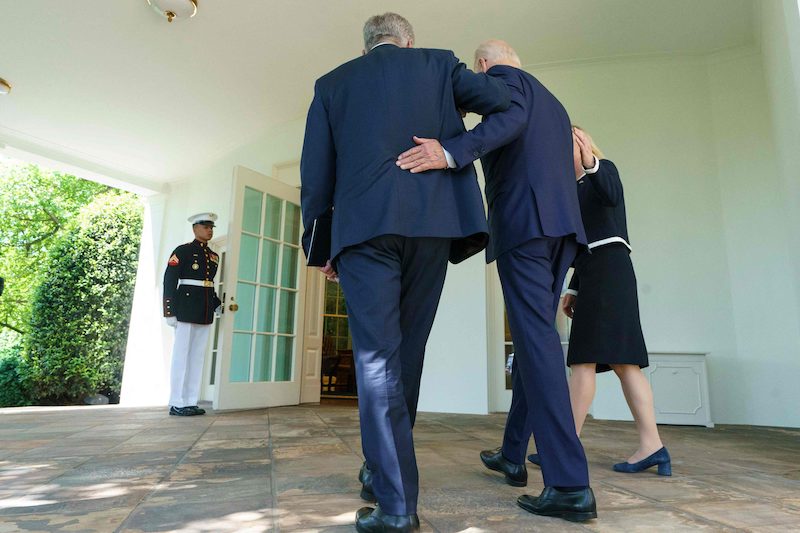 US President Joe Biden (C), Sweden's Prime Minister Magdalena Andersson (R)and Finland's President Sauli Niinistö (L) walk to the Oval Office after speaking to the media in the Rose Garden at the White House in Washington, DC on May 19, 2022. LEHTIKUVA / AFP

Finland and Sweden may join the upcoming NATO summit in Madrid as non-member invitees despite Turkey's stance to deny them entry into the alliance, US Ambassador to NATO Julianne Smith said on Tuesday.

"Our goal here is to try and see if we might have Sweden and Finland sitting at the table in Madrid as invitees," Sputnik quoted Smith as saying.

"Many of us had hopes that we would see these two countries join us in Madrid as invitees at the table with the other leaders. We don't know if that will come to pass."

The United States is working behind closed doors to address the concerns Turkey has raised about Finland and Sweden's possible accession to the alliance, Smith said.

The Madrid summit is scheduled to take place from June 28-30 and will include discussions on areas including NATO force posture and support for Ukraine, Smith added.

On June 12, NATO Secretary-General Jens Stoltenberg said the decisions by Finland and Sweden to apply for NATO membership are historic.

"You have long been our closest partners. You have strong democracies, with capable militaries. And your membership in NATO will increase our shared security," Stoltenberg said in a joint presser with the President of Finland, Sauli Niinistö.

"Finland's and Sweden's membership in NATO would further strengthen the Nordic region of our Alliance. And now, Allies are considering the next steps on your path to NATO," he added.

The NATO Defense Ministers are set to meet on June 15-16 in Brussels. The EU, Georgia, Finland, Sweden and Ukraine are invited to attend the event.