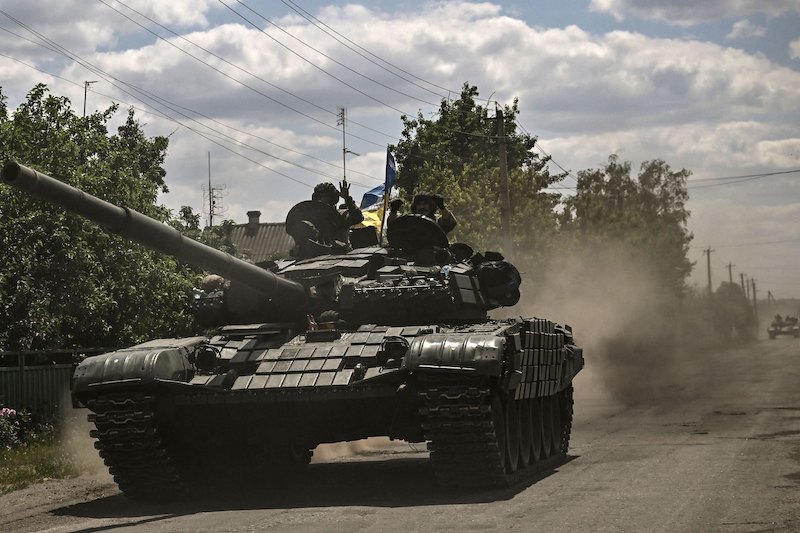 Ukrainian troop members move towards the front line with an army's Main Battle Tank (MBT) in the eastern Ukrainian region of Donbas on June 7, 2022. LEHTIKUVA / AFP

Poland will sign a contract for the supply of weapons to Ukraine worth almost USD 630 million, the largest in 30 years, Polish Prime Minister Mateusz Morawiecki said while visiting the Stalowa Wola defence industry enterprise.

"As a matter of fact, we are now signing one of the largest, if not the largest, arms export contracts in the last 30 years.

The sale of arms for the Ukrainians, to Ukraine. Weapons that have been tested will already be a very important weapon on the battlefield, most likely in eastern Ukraine," Morawiecki said.

However, he did not specify which types of weapons would be supplied to Ukraine under the contract.

Morawiecki said that the financing of arms supplies to Ukraine would be partially covered by the European Union.

"Ukraine partly receives money for this from the European Union, partly pays from its own budget. And Poland receives this money in order to boost our production potential," he said.

In turn, Deputy Prime Minister, Minister of State Assets of Poland Jacek Sasin said that the contract would be worth almost USD 630 million.

"Almost 3 billion, more than 2.7 billion zlotys (about USD 628 million). There has not been such a contract in the Polish defence industry over the past 30 years," Sasin said.