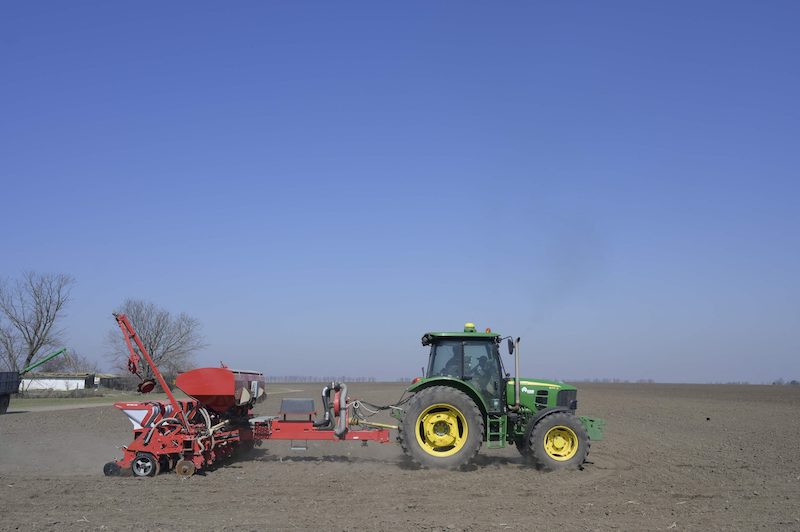 A farmer drives a tractor as he works in the field at Bogatoye village in Izmail on March 24, 2022. LEHTIKUVA / AFP

One hundred days since the 24 February Russian invasion of Ukraine, UN humanitarians on Friday issued a fresh alert amid rising and alarming levels of food insecurity there.

Amin Awad, UN Crisis Coordinator for Ukraine, confirmed that the Organization was making every effort to secure the release of grain stuck in Ukraine's Black Sea ports, UN News reported.

Equally important for the world's farmers is a secure supply of fertilizer from Russia, a major world producer.

"The negotiations are going on," said Awad, speaking to journalists in Geneva from Kyiv. "There (are) a lot of details and shuttling between Moscow and other countries that have concerns and the negotiations continue. But there's no clear-cut emerging solution right now because it's a board of puzzles that they have to move it together."

Highlighting the difficulties linked to international trade with Russia even though there are no sanctions on food and fertilizer humanitarian exports from the country, Awad explained that Grynspan was working "with other financial institutions and the West in general to see how Russia can really, as far as transactions are concerned, resume".

Around 1.5 billion people "are in need of that food and fertilizers" around the world, the UN official explained, adding that he hoped that the negotiations "really go in a smooth manner and be concluded as soon as possible so that the blockade of ports and the resumption of export of fertilizer and food takes place, before we have another crisis in hand."

Today, at least 15.7 million people in Ukraine are now in urgent need of humanitarian assistance and protection, Awad said. Numbers are rising by the day as the war continues, and with winter around the corner, the lives of hundreds of thousands are in peril.

"Today we mark 100 days from the Russian Federation invasion of Ukraine," said Dr Jarno Habicht, WHO Representative and Head of the WHO Country Office in Ukraine.

Speaking from Lviv in the west of the country, he added that it was "100 days too many, and it has put the health system under huge stress...We have verified 269 attacks on health", he said, and 76 deaths together with at least 59 injured during those assaults.

Although humanitarians have explored different ways of transporting grain from Ukraine to the wider world, the only viable solution is by sea, given the huge amount of cereals and other essential foodstuffs produced.

"The five million tonnes a month, that's 100 ships a month," said Awad, adding that rail transportation or trucking, could not manage the same volume and were fraught with logistical problems. "So, is really has to be a maritime movement...to export 50 to 60 million tonnes of food out to the world."

Inside Ukraine, people's everyday needs continue to grow, as the Russian advance in the eastern oblasts continues. Nearly 14 million people have been forced to flee, about one third of the entire population of Ukraine, and workers have lost their jobs and are queuing for food, UN humanitarians said.