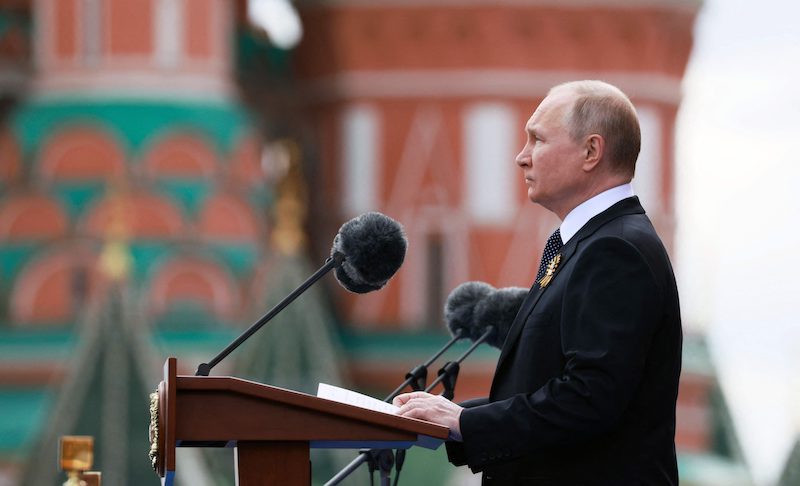 Russian President Vladimir Putin gives a speech during the Victory Day military parade at Red Square in central Moscow on May 9, 2022. - Russia celebrates the 77th anniversary of the victory over Nazi Germany during World War II. LEHTIKUVA / AFP

Russian President Vladimir Putin on Monday defended the country's military action in Ukraine in his speech at a Victory Day parade on Moscow's Red Square on Monday. Speaking at the Red Square marking the defeat of Nazi Germany, he said, "We (Russia) will never give up our love for the country, faith, traditional values, ancestral customs and respect for all peoples and cultures. As for the West, it seems to be determined to cancel these millennia-old values."

"This moral degradation paved the way for cynical falsifications of the history of World War II, attempts to incite Russophobia, glorify traitors, mock the memory of their victims and wipe out the bravery of those who fought and suffered for the Victory," he added.

Putin pointed out that the US, particularly after the collapse of the Soviet Union, "started talking about its exceptionalism, which is humiliating for the entire world."

He also addressed Russian forces fighting in Ukraine and said they are fighting for the "Motherland, for its future, so that no one forgets the lessons of World War II."

Over the situation concerning NATO presence in Europe, Putin said: "Everything indicated that a clash with neo-Nazis, Banderites [Ukrainian nationalists], on whom the United States and their younger partners counted on, would be inevitable."

"Danger was increasing every day. Russia repelled this aggression in a preventative way. This was the only correct decision, and it was a timely decision. The decision of an independent, sovereign and powerful nation," the Russian President was quoted as saying by CNN.

The military parade commemorating the 77th anniversary of the end of World War II  began on the Red Square in Moscow.

As many as 11,000 military personnel will march across the square, and 131 units of military equipment will be observed during the parade, Sputnik news agency reported.

The parade also includes an aviation part, but it was decided to cancel it this year due to weather conditions.