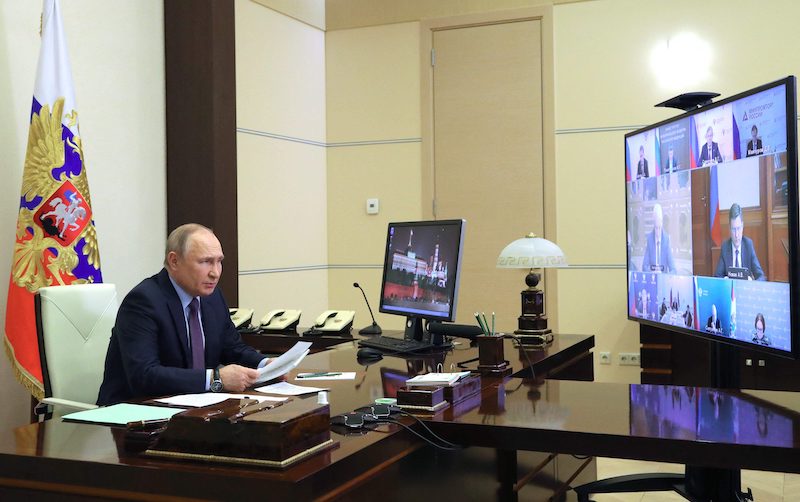 Russian President Vladimir Putin chairs a meeting on the situation in the oil and gas sector at the Novo-Ogaryovo state residence outside Moscow, on April 14, 2022. LEHTIKUVA / AFP

European Union companies may open an account in Gazprombank to pay for Russian gas using a new payment scheme devised by Moscow without running afoul of the bloc's sanctions against Moscow, the European Commission said on Friday.

On March 31, Russian President Vladimir Putin signed a decree stipulating that all contracts for gas supplies with companies registered in "unfriendly" countries be settled in rubles. The measure only concerns Gazprom's pipeline exports, with the company expected to receive the first ruble payments in the second half of April and in May  .

In an FAQ document reviewed by Sputnik on Friday, to the question of whether it is "still possible to pay for gas after the adoption of Decree number 172 of March 31 without getting in conflict with EU law," the European Commission replied in the affirmative.

"Yes, this appears possible. EU companies can ask their Russian counterparts to fulfil their contractual obligations in the same manner as before the adoption of the Decree, i.e. by depositing the due amount in Euros or Dollars. The Decree of 31 March does not preclude a payment process which is in line with the EU restrictive measures," the commission said in its guidelines.

At the same time, the document admits that "the procedure for derogations from the requirements of the Decree is not clear yet," but states that European importers are not prohibited from opening accounts in the Gazprombank. The guidelines also said that EU companies can clarify that they are planning to fulfil their obligations under existing contracts and consider payments in euros and dollars.

On February 24, Russia launched a military operation in Ukraine after the breakaway republics of Donetsk and Luhansk appealed for help in defending themselves against Ukrainian provocations. In response, the EU rolled out a comprehensive sanctions campaign against Moscow, which included airspace closures and restrictive measures targeting numerous Russian officials and entities, media and financial institutions.