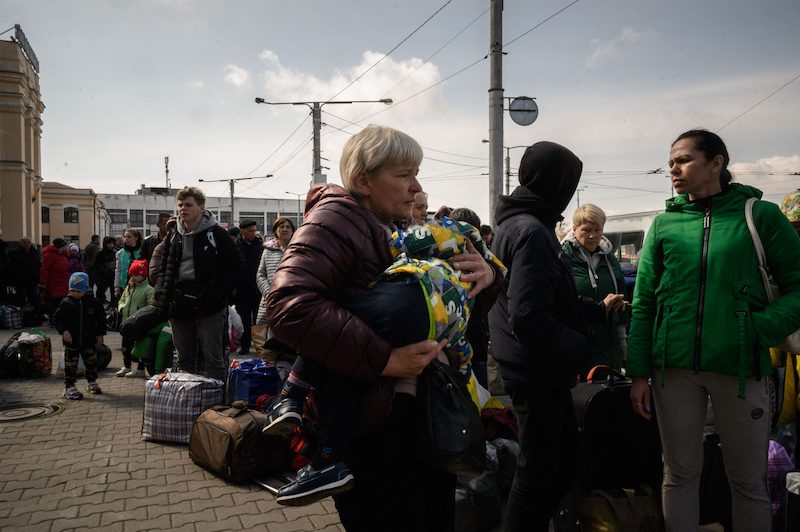 Internally displaced people prepare to board an evacuation train departing for Lviv, the day after arriving as part of a humanitarian convoy from the besieged city of Mariupol, at a railway station in the southern city of Zaporizhzhia on April 22, 2022. LEHTIKUVA / AFP

According to the latest report by UN Migration Agency, over 7.7 million, 17 per cent of the country's population, have been internally displaced since the beginning of Russia's war on Ukraine.

The International Organization for Migration (IOM), in its report, said that more than 600,000 additional people were internally displaced in Ukraine in the first 17 days of April.

The most pressing needs identified included cash and access to financial support, followed by medicines and medical supplies, reported IOM.

IOM Director General Antonio Vitorino said, "Women and children, the elderly, and people with disabilities have been disproportionately affected as they all represent a highly vulnerable group of people."

"Our work in support of those forced to flee their homes and all vulnerable populations affected by the war continues, but a humanitarian ceasefire is crucial to allow for aid delivery and access to hard-to-reach communities," he added.

The UN Migration Agency's report reveals that among those currently displaced, 15 per cent plan to return to their homes in the next two weeks, heading mostly to Kyiv and the north of the country, while 8 percent of the general population report having had their homes damaged by attacks.

So far, at least 150,000 people have received direct assistance from IOM in Ukraine since the beginning of the war. The assistance includes food, non-food and hygiene items, cash, mental health and psychosocial support, as well as via information campaigns to help prevent human trafficking and sexual exploitation and abuse.

Notably, Russia launched a "special military operation" in Ukraine on February 24, which the West has termed an unprovoked war. As a result of this, the Western countries have also imposed several crippling sanctions on Moscow.