Europe’s construction sector has overcome its coronavirus-induced slump. This is evident from calculations by the EUROCONSTRUCT forecasting network, of which the ifo Institute is a member. “Construction activity will grow by 3.6 percent in 2022, after expanding by 5.6 percent in 2021 and contracting by 4.7 percent in 2020,” says ifo industry expert Ludwig Dorffmeister.

At the same time, construction services became more expensive in many places in 2021: in eight countries, construction prices increased by at least 5 percent year over year. In Hungary and Italy, the percentage increase was actually in the double digits. In Germany, prices went up by 9.1 percent. Only in five countries was the year-over-year price increase in 2021 below 3 percent.

In ten countries, construction activity is already greater than before the crisis. However, in eight countries, including Germany, 2021 will see even less construction than 2019. Only in France and Slovakia was the decline steeper than in Germany.

The ifo Institute is the German founding member of EUROCONSTRUCT, which brings together researchers from fifteen countries in Western Europe and four countries in Central Eastern Europe. Further information can be found under www.euroconstruct.org/ec/reports 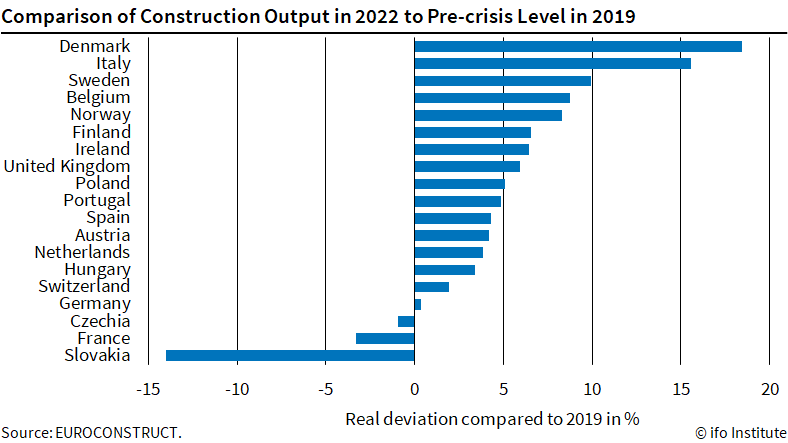