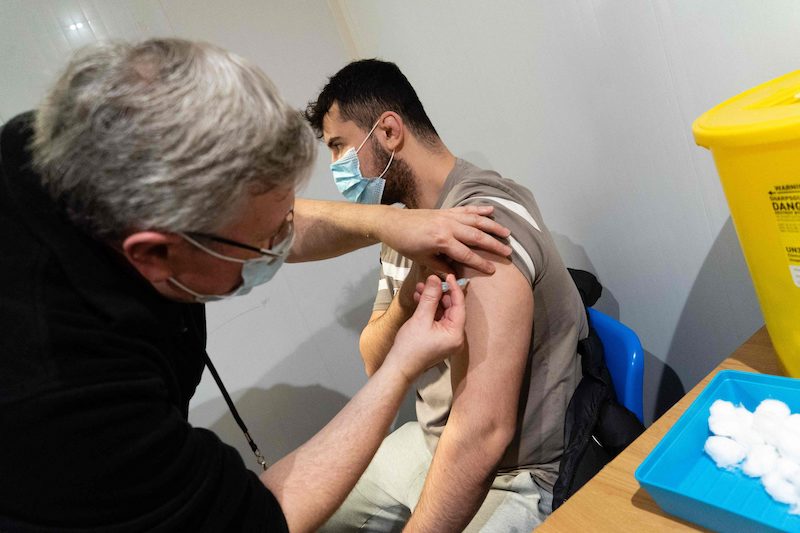 A member of the public receives a dose of a Covid-19 vaccine inside a vaccination centre set up at Grim's Dyke Golf Club in north west London on December 26, 2021. LEHTIKUVA / AFP

Emphasising that the Omicron variant is infecting both vaccinated and unvaccinated people worldwide, WHO Chief Scientist Dr. Soumya Swaminathan has said that it appears that vaccines are still proving to be effective because even though the numbers are going up exponentially in many countries, severity of the disease has not surged to a new level.

"As expected, T cell immunity holding up better against #Omicron. This will protect us against severe disease. Please get vaccinated if you have not," said Swaminathan in a tweet on Wednesday. Either vaccines or prior infections with COVID-19 trigger human T cell response.

Explaining factors that account for vaccine's effectiveness against COVID-19, Swaminathan virtually at the WHO press briefing on Wednesday said that vaccine effectiveness varies a little bit between vaccines though the majority of all of the WHO Emergency Use Listing vaccines actually have very high rates of protection against severe disease and death at least till the delta variant.

Referring to the third factor which decides the effectiveness of the vaccine, Swaminathan said, "It is the time since vaccination and the waning of the immunity and we know that there is some amount of meaning but again there is more waning for infection against infectious and that is why we are seeing a lot of breakthrough infections now especially with Omicron because Omicron does have the capacity to overcome pre-existing immunity, and needs higher levels anti-bodies and protection."

Further, she said that now the evidence on Omicron is just emerging and it would still be premature to conclude definitely but all of the lab studies are pointing towards a reduction in neutralisation capacity and also what it is clinically seen that people who have been vaccinated, people who have had prior infections are still getting breakthrough infections with Omicron.

"That is why the numbers that we are seeing around the world today are extremely high because these infections are occurring in both vaccinated and unvaccinated people. However, it appears that vaccines are proving to be still protective because even though the numbers are going up exponentially in many countries severity of the disease has not surged to a new level," she added.

Stressing that hospitalisations and even within hospitalised people the need for ventilation, the need for critical care that does not seem to be going up proportionately, said Swaminathan, adding that this is a good sign and it is telling us that previous immunity is either due to vaccines or in some cases due to natural infection by the virus is providing some protection against the severe disease.

"And this is what we had expected because immunity, immune responses are much more than just neutralising antibodies," she added.