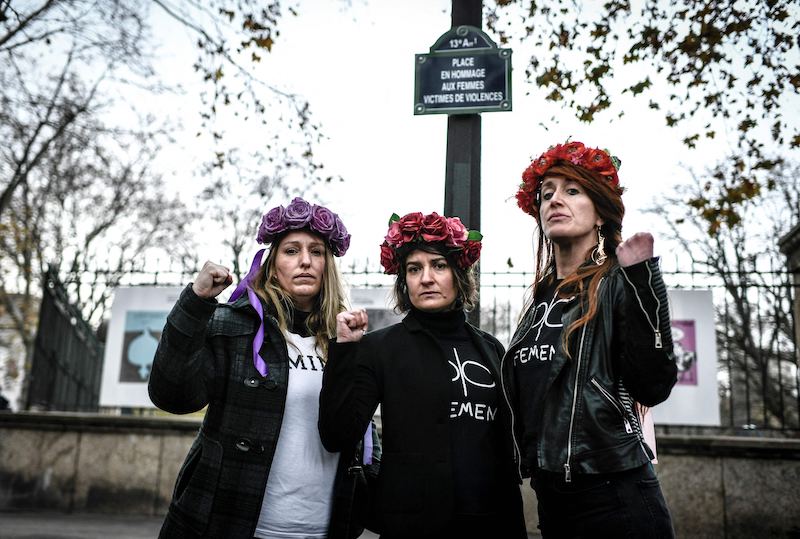 Femen activists pose on November 25, 2021 in Paris during the inauguration of a square to pay tribute to women victims of violence. LEHTIKUVA / AFP

PES Women and its national member organisations are committed to fighting for a Europe where everyone, no matter their gender, can lead a life free from violence. That is why PES Women around today's International Day for the Elimination of Violence against Women are launching their latest campaign with the slogan "The line has been crossed – Zero tolerance zone for gender-based violence".

"One in three women globally, around 736 million, have been subjected to physical or sexual violence in their lifetime. We say enough is enough. The line was crossed the first time a woman was exposed to violence, but still in 2021 we are seeing the line crossed again and again every day, especially because of the increase in violence during the pandemic. That is why prevention is so important, in conjunction with the prosecution of perpetrators and protection of victims and survivors.

"Together as progressive European feminists, we are calling for stronger ambition to make Europe a zero-tolerance zone. The EU must ratify the Istanbul Convention as soon as possible. There is no time to lose! PES Women is also calling for additional ambitious EU legislation to ensure that women's rights are protected across Europe and that, as a Union of Equality, we make combatting gender-based violence a legislative and financial priority at all levels of governance.

"We progressives have the political will, but ending violence against women can only be achieved through a collective effort, with leadership and action from the highest political level to concrete local implementation that benefits women and girls in all walks of life."

To visualise the campaign, PES Women has produced specially designed barrier tape, reminiscent of police incident tape. The purpose is to raise awareness of the shadow pandemic of domestic and intimate partner-violence and femicides. The tape and slogan promote prevention, drawing attention to the fact that once the police are on the scene, it is often too late. The tape has been sent out to PES member parties and allies to be used in local actions, manifestations offline or online around the 25 November, during the UN 16 days of Activism against Gender-Based Violence (25 November to 10 December 2021), and throughout the rest of the year.

As part of the campaign, PES Women has published a manifesto - Zero-Tolerance Zone: A Europe Free from Gender-Based Violence - putting forward its demands to realise this goal based on three pillars: a strong legal framework, adequate funding and changing mindsets.