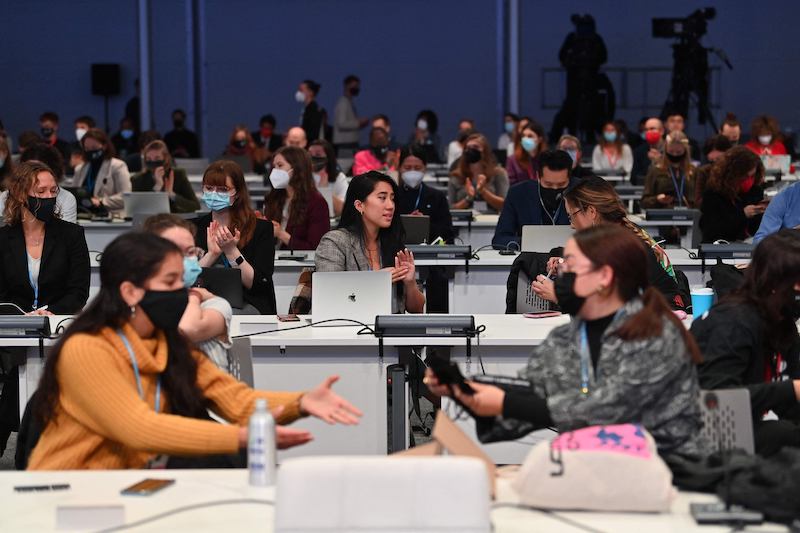 Delegates chat at the People's Plenary during the COP26 UN Climate Change Conference in Glasgow on November 12, 2021. - A draft statement of the COP26 summit called on nations to ease their reliance on fossil fuels as talks entered their final hours without any sign of delivering the emissions cuts needed to limit global warming to 1.5C. LEHTIKUVA / AFP

A new draft of the final declaration being negotiated at the UN Climate Change Conference (COP26) in Glasgow published on Friday appears to back away from a previous call to end all use of coal and phase out fossil fuels.

The text released by the COP26 president on Wednesday called upon countries to "accelerate the phasing out of coal and subsidies for fossil fuel," but the wording has now been changed to specify that the call refers only to "unabated coal power" and "inefficient" subsidies.

"Calls upon Parties to accelerate the development, deployment and dissemination of technologies, and the adoption of policies, to transition towards low-emission energy systems, including by rapidly scaling up clean power generation and accelerating the phase-out of unabated coal power and of inefficient subsidies for fossil fuels," reads the new the draft position proposed by COP26 President Alok Sharma.

In the case of coal-fired power plants, the term "unabated" refers to facilities that do not use carbon capture and storage technology to reduce carbon emissions.

The COP26, which is due to conclude on Friday, is seen as the world's last chance to reach meaningful commitments to fulfill the goals set out by the 2015 Paris Agreement on greenhouse emission reduction, carbon neutrality, global warming and climate finance.