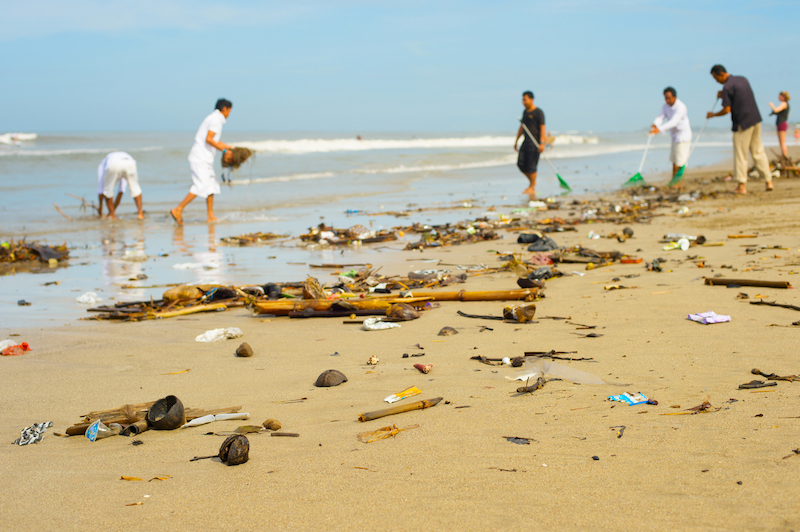 Since the start of the 2020 pandemic, many have become accustomed to using personal protective equipment, which is often disposable and not used for a long time. The problem of mass pollution of the environment with used masks, gloves and bottles of antiseptics poses a significant threat to the biosphere worldwide.

More than 25,000 tons of personal protective equipment (PPE) and other types of plastic waste associated with COVID-19 have landed in the oceans, new research reveals.

Researchers from the School of Atmospheric Sciences at Nanjing University and the Scripps Institute of Oceanography at the University of California, San Diego, are leading the new analysis, which looks at the period from the pandemic in 2020 to August 2021 predicts that almost three-quarters of it, about 71 percent, will be dumped on beaches by the end of the year.

According to the study, from the beginning of the epidemic to August 2021, 193 countries in the world produced 8.4 million tons of plastic waste related to the pandemic. Most of the plastic associated with COVID-19 comes from medical waste generated by hospitals, which "overshadows" the contribution of personal protective equipment and packaging from online shopping giants such as Amazon and eBay.

"Plastic waste harms marine life and has become a major global environmental problem," the document said in an introduction. "The recent COVID-19 pandemic has led to increased demand for single-use plastics, which has increased the pressure on this already uncontrollable problem."

The researchers say their work highlights "a long-standing problem for the ocean environment and accumulates mainly on beaches and coastal sediments."

Masks, face shields, disposable gloves and surgical aprons are examples of personal protective equipment. Personal protective equipment and all plastic packaging used to store these products, as well as plastic from test kits, are considered "COVID-19-related plastic". If not disposed of properly, all of these substances can enter rivers and end up in the world's oceans.

According to the study, the Shatt al-Arab, Indus and Yangtze rivers, which flow into the Persian Gulf, the Arabian Sea and the East China Sea, respectively, account for 73 percent of total plastic discharges. Plastic discharges into European rivers account for 11 percent of the total, and the contribution of other continents is modest.

The researchers compared the number of cases of the new coronavirus with the amount of COVID-19-related plastic waste that flows into rivers and across continents. Asia has the largest amount of waste generated - 46.3 percent of the world's plastic waste associated with the pandemic, while accounting for a total of 31.2 percent of global cases of COVID-19, after the Americas with 47.6 percent.

According to the authors, this reflects the lower level of medical waste management in many developing countries, including India and China, compared to industrialized countries in North America and Europe with a high incidence of infection.

According to the study, most of the plastic waste in the oceans is likely to settle on beaches and the bottom within three to four years. And a smaller portion of them will end up in the open ocean, where they will eventually fall into the trap of the centers of ocean basins or subtropical huge systems of rotating currents in each of the five great oceans. According to researchers, the Arctic Ocean is a "dead end" for the plastic waste dumped in it. This is due to the patterns of ocean circulation.

The authors advocate for better management of medical waste in epicenters, especially in developing countries, in order to combat the influx of plastic waste into the oceans. They also call for greater publicity for the environmental impact of personal protective equipment and other plastic products, as well as for the development of other environmentally friendly materials.