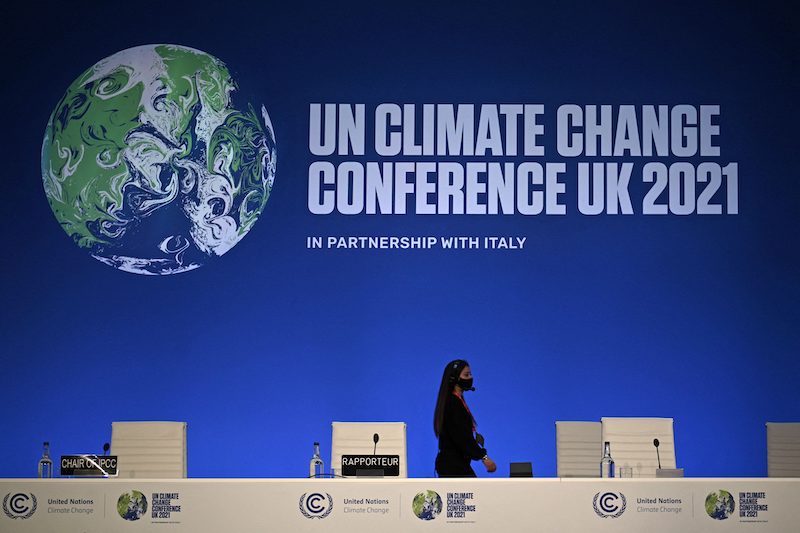 Final preparations are made for the start of The Procedural Opening of the COP26 UN Climate Change Conference in Glasgow, Scotland on October 31, 2021, on the first day of the conference. LEHTIKUVA / AFP

The UK will be hosting the 26th UN Climate Change Conference of the Parties (COP26) in Glasgow from October 31 - November 12, 2021, to accelerate action towards the goals of the Paris Agreement and the UN Framework Convention on Climate Change (UNFCCC).

With increasing global surface temperatures the possibility of more droughts, floods, wildfires and increased intensity of storms are likely to witness across the world.

To overcome this climate crisis, the planet needs a unified fight as though the world is divided by borders, the climate has no borders, it affects the whole world.

COP26 is the 2021 edition of the United Nations annual climate change conference and parties are the signatories of the UNFCCC - a treaty agreed in 1994 which has 197 Parties (196 countries and the EU).

United Nations climate change conferences are among the largest international meetings in the world. The negotiations between governments are complex and involve officials from every country in the world as well as representatives from civil society and the global news media.

At COP21, which took place in Paris in 2015, for the first time ever,  momentous happened: every country agreed to work together to limit global warming to well below 2 degrees and aim for 1.5 degrees, to adapt to the impacts of a changing climate and to make money available to deliver on these aims. The Paris Agreement was born. The commitment to aim for 1.5 degrees is important because every fraction of a degree of warming results in the tragedy of many more lives lost and livelihoods damaged.

Under the Paris Agreement, countries committed to bringing forward national plans setting out how much they would reduce their emissions - known as Nationally Determined Contributions, or 'NDCs'. They agreed that every five years they would come back with an updated plan that would reflect their highest possible ambition at that time.

The limiting of temperature rise to 1.6 degrees is very essential. At 2 degrees of global warming, there would be widespread and severe impacts on people and nature. A third of the world's population would be regularly exposed to severe heat, leading to health problems and more heat-related deaths.

Almost all warm-water coral reefs would be destroyed, and the Arctic Sea ice would melt entirely at least one summer per decade, with devastating impacts on the wildlife and communities. We cannot rule out the possibility that irreversible loss of ice sheets in Greenland and the Antarctic could be triggered, leading to several metres of sea-level rise over centuries to come.

At 1.5°C, the impacts would be serious, but less severe. There would be lower risks of food and water shortages, lower risks to economic growth and fewer species at risk of extinction.

Threats to human health from air pollution, disease, malnutrition and exposure to extreme heat would also be lower.

At COP26, the parties will be asked to come forward with ambitious 2030 emissions reductions targets (NDCs) that align with reaching net zero by the middle of the century.

To deliver on these stretching targets, countries will need to accelerate the phaseout of coal, encourage investment in renewables, curtail deforestation and speed up the switch to electric vehicles.

The climate is already changing and it will continue to change even as we reduce emissions, with devastating effects. At COP26, the parties will work together to enable and encourage countries affected by climate change to protect and restore ecosystems, build defences, put warning systems in place and make infrastructure and agriculture more resilient to avoid loss of homes, livelihoods and lives.

To realise the goals of net-zero emissions and adapt to protect communities and natural habitats, developed countries must deliver on their promise to raise at least USD 100 billion in climate finance per year.

International financial institutions must play their part and need to work towards unleashing the trillions in private and public sector finance required to secure global net-zero to protect the environment.

The planet can only rise to the challenges of climate change by working together.

At COP26, parties should finalise the Paris Rulebook (the rules needed to implement the Paris Agreement) to check the devastating effects of climate change.