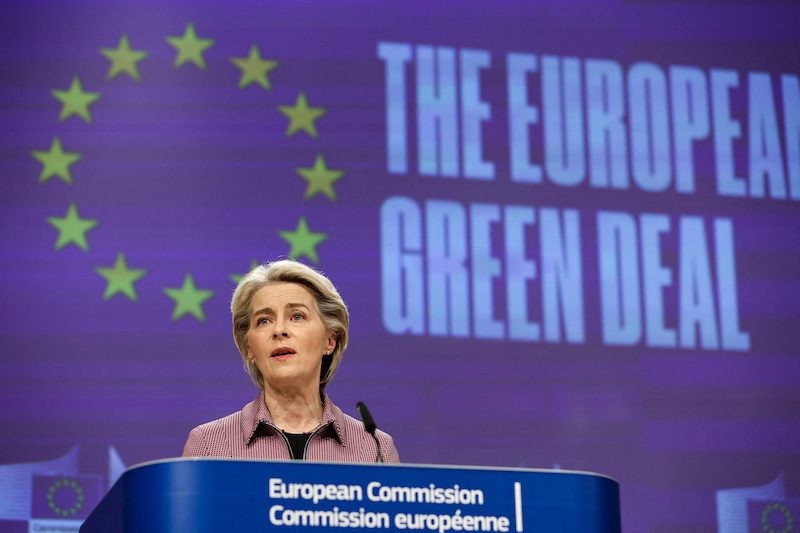 European Commission President Ursula Von der Leyen speaks during a press conference ahead of the G20 Summit and the UN Climate Change Conference (COP26) at the EU headquarters in Brussels on October 28, 2021. LEHTIKUVA / AFP

The Parties to the UN Climate Change Agreement will meet in Glasgow, Great Britain on 31 October–12 November. This is the first meeting since the start of the term of the Paris Agreement in 2020. The key aim is to accelerate actions by countries towards stricter emission reductions.

In particular, the Heads of State and Government who convene at the World Leaders Summit in Glasgow on 1–2 November are expected to announce stricter emission reduction commitments. Finland's representative at the meeting of the Heads of State or Government will be President of the Republic Sauli Niinistö. In the second week of the Conference Finland's delegation will be led by Minister of the Environment and Climate Change Krista Mikkonen.

Countries' commitments not enough to limit warming to 1.5 degrees

The key background document for the meeting is the report published by the Intergovernmental Panel on Climate Change in August, according to which the rise in global average temperature will exceed the limit of 1.5 degrees Celsius already during this decade. The Secretariat of the UN Climate Change Convention published a Synthesis Report on the commitments of the countries in September. Based on the report, the emissions will grow by 16% by 2030 while, according to IPCC, they should be reduced by 45% to limit warming to 1.5 degrees. With the present actions, global warming would be about 2.7 degrees.

"New and stronger efforts are now needed to implement the Paris Agreement. We are all committed to the aim of limiting warming to 1.5 degrees but this is not yet adequately reflected in concrete actions. Stricter emission reduction pledges are needed especially from large economies, and we hope to hear about these already at the G20 meeting next weekend. Now everyone must bear their share of the responsibility," Minister of the Environment and Climate Change Krista Mikkonen says.

Details of implementing Paris Agreement to be discussed

The Glasgow meeting will not discuss the countries' emission reduction commitments but, rather, the focus of the negotiations will be on the tools for implementing the Paris Agreement. The aim is to reach an agreement e.g. on the details of the reporting required from the countries (Enhanced Transparency Framework), the cycle according to which the countries should tighten their commitments and the rules for using international market mechanisms. The rules for market mechanisms concern the ways how countries could utilise climate actions they have financed in partner countries to achieve the emission targets they have announced for the Paris Agreement.

"Although the preparatory meeting in Italy in September proceeded in a good spirit, as a whole the negotiations have progressed quite slowly since the Madrid Climate Change Conference. In many issues the countries' views are still far apart, and we do not yet have any draft text to get really started. This means that we can expect truly tight negotiations in Glasgow," Nummelin says.

The campaigns by the UK as the host country of the meeting have focused on fiver major themes : finance, climate change adaptation and resilience, energy, transport and nature-based solutions.

Finland is involved in many of these campaigns and the initiatives related to these, including the Adaptation Action Coalition, which aims to support countries in practical actions to adapt to climate change, and the Adaptation Finance Champion's Groups, which wishes to improve the quality and amount of funding for adaptation and access to it especially for the least developed countries. Both of these initiatives will support the progress of the negotiation process. Finland is also involved in the coalition to phase out coal power and in the coalition to promote the protection of the seas.

The Coalition of Finance Ministers for Climate Action will meet in connection with the Glasgow Climate Change Conference on Wednesday 3 November. The topics to be discussed include how climate issues can be integrated into decision-making on economic policy. Finland's representative at this meeting is Minister of Finance Annika Saarikko, who chairs the Coalition together with the Minister of Finance of Indonesia.

Health security has been taken into account in the number of participants at each meeting, in the design and cleaning of meeting venues, and in scheduling the meetings. Participants are expected to take a COVID-19 rapid test on a daily basis and participate in PCR tests at the beginning of the meeting and, if necessary, at a later date. When visiting and moving about in the venues, the participants must wear a mask and ensure a safe distance from other participants.