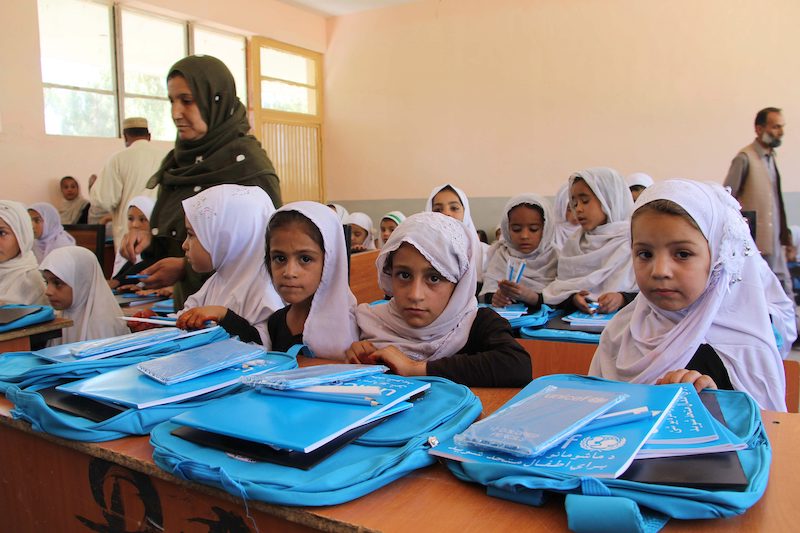 Afghan school girls looking on as they receive pens and bags from the UNICEF at a school in Lashkar Gah in Helmand province. (Photo by NOOR MOHAMMAD / AFP)

The WHO and UNICEF have welcomed the decision of the Taliban to allow polio vaccination of all children in Afghanistan, reported local media.

The campaign -- which is set to start on November 8 -- will be the first in three years that reaches entire Afghanistan including 3.3 million children who were previously deprived of the vaccine, reported Khaama Press.

Dapeng Luo, the WHO representative in Afghanistan, expressed gratitude for the decision. Luo emphasised that the step is extremely important.

Underlining that multiple doses of oral polio vaccine offer the best protection, Luo said: "We are pleased to see that there is another campaign planned before the end of this year."

Luo stressed that sustained access to all children is "essential to end polio" for good.

Meanwhile, UNICEF in Afghanistan is setting out plans with its partners to fully eradicate polio from the country, according to Khaama Press.

Children aged from 6 years to 59 months will be given vaccines under the programme.

Calling on the local leaders to respect the neutrality of the health system, the WHO said that they should ensure every child gets vaccinated in their neighbourhood.