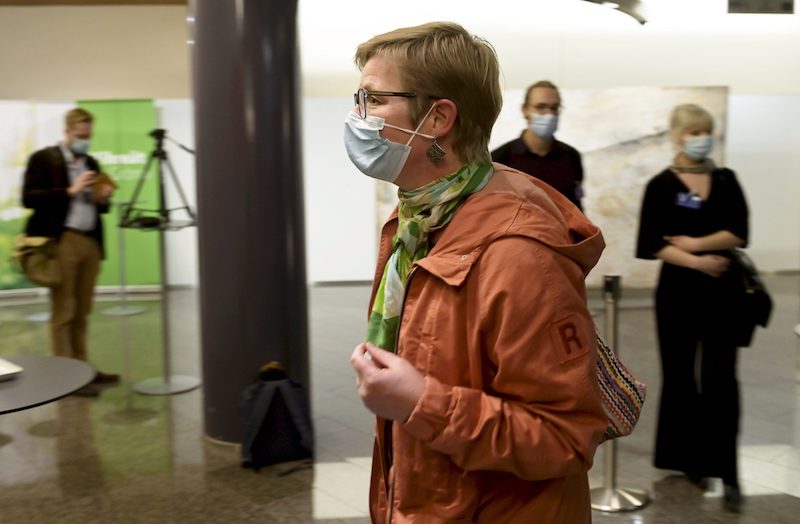 Minister of the Environment and Climate Change Krista Mikkonen in Helsinki on 11th of October 2021.

In the first part, the meeting of the ministers will mainly take place virtually. The ministers are expected to adopt the Kunming Declaration that will outline the level of ambition of the outcome that the countries are trying to achieve together. Finland's representative at the meeting is Minister of the Environment and Climate Change Krista Mikkonen, who will speak at the high-level segment on Tuesday 12 October.

"The aim is to define the framework for the work to be done during this decade to halt the loss of biodiversity. There is an urgent need for a societal change that respects the natural environment even more strongly. We must commit ourselves to the targets, and the common rules must be complied with at the international level. Combatting the loss of biodiversity requires local action, which is why we must also be active as a nation", Minister of the Environment and Climate Change Krista Mikkonen says.

The negotiations have four main goals that must be achieved by 2050. The key question concerns the surface area of protected marine and land areas, which should be raised to 30 per cent. The EU is already committed to this in its own Biodiversity Strategy. The second goal, sustainable use of nature, is also included in the EU Biodiversity Strategy. The other goals concern the fair sharing of the benefits arising from the access to and use of genetic resources and the mainstreaming of nature issues, which means that in future biodiversity would be part of all political and societal decisions and their implementation.

Under the four long-term goals, there will be a total of around 20 targets through which the progress will be monitored very closely. These targets should be reached by 2030.
"The targets should be clearly delimited and quantitative so that they will genuinely steer the actions. What we aim for is a net positive impact, which means that measures such as restoration will cause more benefits than harm to the natural environment, society and economy", says Finland's chief negotiator, Senior Ministerial Adviser Marina von Weissenberg.

Biodiversity refers to the diversity of species and habitats and to genetic diversity within species. A diverse nature produces many important things, including clean air, water, food and carbon sinks. Now, however, biodiversity is declining faster than ever. According to the report of the Intergovernmental Science-Policy Platform on Biodiversity and Ecosystem Services IPBES, about one million animal and plant species are at risk of extinction, many of them within decades. In Finland, too, every ninth species and one out of two habitat types are threatened. Based on the report, the main causes for biodiversity loss are land use changes, the exploitation of animals and plants, climate change, pollution and the spread of invasive species.

The global efforts to protect biodiversity are based on the UN Convention on Biological Diversity CBD concluded in 1992. The objectives of CBD are the conservation of ecosystems and plant and animal species, sustainable use of natural resources and fair and equitable sharing of the benefits arising out of the utilization of genetic resources. The Convention has been signed by 196 parties and it entered into force in 1993. The Conference of the Parties held every two years is the highest decision-making body of the Convention.