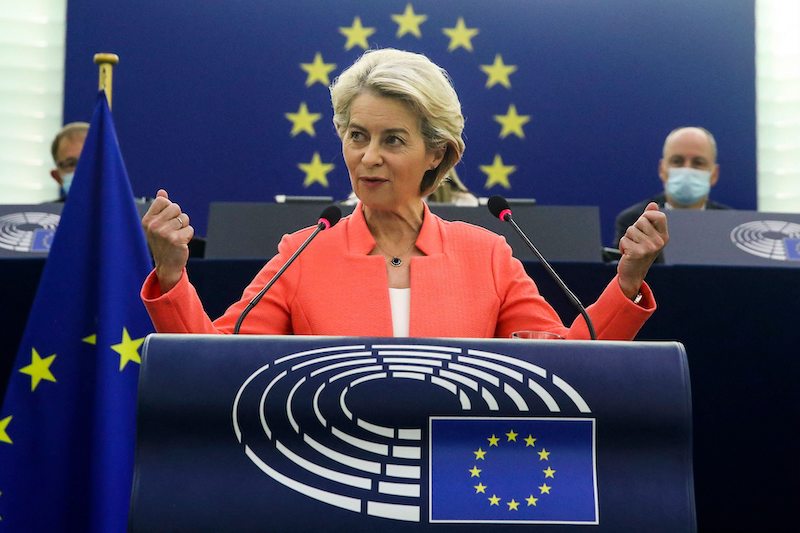 European Commission President Ursula von der Leyen delivers a speech during a debate on "The State of the European Union" as part of a plenary session in Strasbourg on September 15, 2021. LEHTIKUVA / AFP

European Commission President Ursula von der Leyen on Wednesday said the bloc will increase its humanitarian aid for Afghanistan by extra 100 million euros to avert the humanitarian disaster in the country.

"We stand by the Afghan people. We must do everything to avert the real risk of a major famine and humanitarian disaster. This is why we will increase again humanitarian aid for Afghanistan by 100 million euros (USD 118 million) - part of a new, wider Afghan Support Package," von der Leyen tweeted.

This comes as EU foreign policy chief Josep Borrell on Tuesday said that the European Union has no other option but to engage with the Taliban regime in Afghanistan if it wants to influence events in the country.

However, Borrell underlined at a European Parliament plenary session debate in the French city of Strasbourg that engagement does not mean recognition, Xinhua news agency reported.

Describing the summer's events in Afghanistan as "a tragedy," the EU foreign policy chief insisted that engagement is a priority for the EU to continue protecting as many people as possible.

Earlier, United Nations appealed to countries that pledged USD 1.2 billion in relief for Afghanistan to quickly release the funds to turn money into food, health care and protection for victims.

Stephane Dujarric, the spokesperson for UN chief Antonio Guterres on Tuesday, said the pledges in humanitarian aid announced at a high-level conference in Geneva on Monday, include funding for the flash appeal for Afghanistan and regional response.

"We stressed that pledges now need to be disbursed quickly so that the UN and humanitarian partners, including national and international non-governmental organizations (NGOs), can move quickly to turn funds into food, health care and protection for Afghan children, women and men in need," Dujarric said.