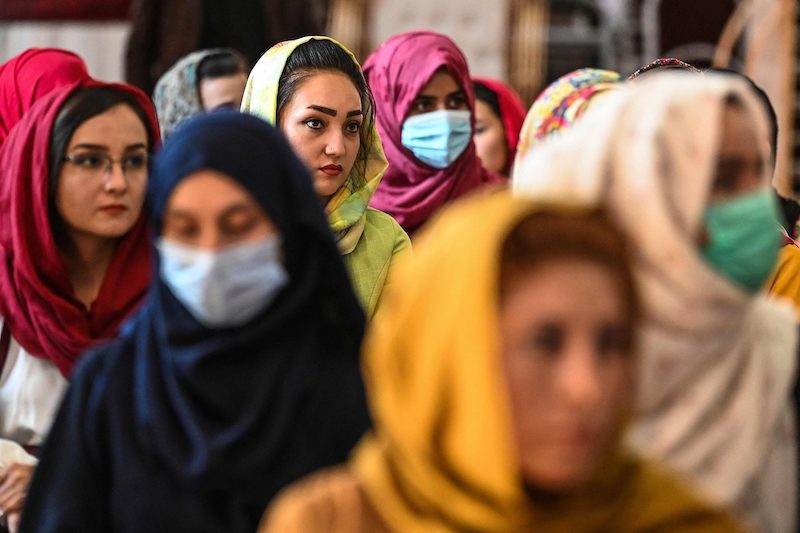 Afghan women take part in a gathering at a hall in Kabul on August 2, 2021 against the claimed human rights violations on women by the Taliban regime in Afghanistan. LEHTIKUVA / AFP

“Women's political participation is a fundamental prerequisite for gender equality and genuine democracy. Women’s participation in all walks of life is essential for an inclusive, strong and prosperous society in Afghanistan, both to meet the many challenges the country faces today and to succeed tomorrow. It is therefore critical that political decision-making processes are participatory, responsive, equitable and inclusive,” stated Pramila Patten.

"Following today's news of the exclusion of women in the new Government announced by the Taliban, I join with many around the world in expressing my disappointment and dismay at a development that calls into question the recent commitments to protect and respect the rights of Afghanistan's women and girls.

“I reiterate that respect for women’s human rights is a litmus test against which any authority must be judged and that the establishment of a truly “inclusive” Government with the participation of women is a central element of that. When women do not have their proper place in government their engagement at all levels is called into question, whether as humanitarian workers, medical professionals, educators, entrepreneurs or any of the range of essential roles women must play if the basic services on which the people of Afghanistan depend are to function. By excluding women from the machinery of government, the Taliban leadership has sent the wrong signal about their stated goal of building an inclusive, strong and prosperous society.

"I am also disappointed by the apparent decision to no longer include a Ministry for Women among the institutions of government. Such ministries are found around the world and reflect governments' commitment to ensure respect for women's human rights. To no longer have such a ministry in Afghanistan is a further step backwards.

“I reaffirm my call on the Taliban leadership to fully comply with its legally binding obligations under international treaties to which Afghanistan is party as well as with relevant constitutional provisions. This demand unambiguously the guarantee of equality for all citizens including the full participation of women in political and decision-making processes. The international community has been clear and will continue to be so: women’s rights including the right to full and meaningful participation in public and political life are non-optional, non-negotiable human rights.

“I further note with serious concern the reported use of force by authorities in Kabul against peaceful protestors, mostly women, who were demanding the equal enjoyment of their rights.  These actions reinforce and validate concerns about restrictions being placed in practice on women’s human rights, including their right to participate in public and political life. Freedom of peaceful assembly and of association are foundational rights upon which others depend. Their denial is one of the most serious violations of human rights, calling all others into question.

“The world’s gaze rests firmly upon Afghanistan. The course currently set by the Taliban authorities for women’s human rights must change immediately if the growing fears of the international community are to be addressed and the future of women and girls assured”.