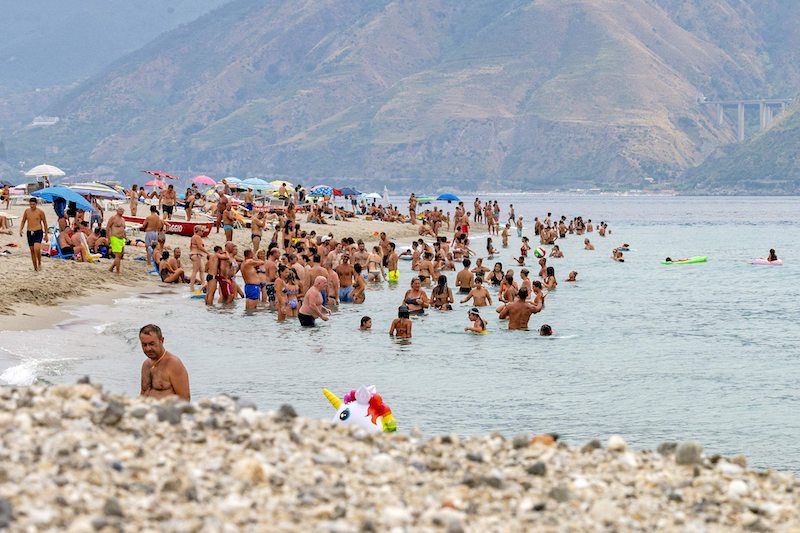 People enjoy the sea on the beach in Italy. LEHTIKUVA / AFP

Italian authorities on Wednesday (local time) said that the island of Sicily may have set an all-time heat record for Europe, with a temperature of 48.8 degrees Celsius (119.8 degrees Fahrenheit).

The record in Italy was confirmed by Sicilian authorities but needs to be officially verified by the World Meteorological Organization (WMO), reported CNN.

"At the moment there are no reasons to invalidate it, but if possible we will make an ex-post evaluation on the accuracy of the measure," said the Sicilian Agrometeorological Information Service, Sicily's official weather station operator.

The city of Siracusa hit the record as an anticyclone -- which Italian media reports are referring to as "Lucifer" -- swept in and continued to move north up the country, reported CNN.

Moreover, a persistent heatwave around the Mediterranean in Europe and North Africa has contributed to some of the worst fires seen there in years.

Earlier, the hottest temperature ever recorded in Europe was 48.0°C (118°F) in Athens, Greece in 1977, according to the World Meteorological Organization (WMO).

As per scientists, it's the climate crisis that is making heatwaves and fires more frequent and intense, and therefore more destructive, reported CNN.

An authoritative report by the UN's International Panel on Climate Change published Monday said that 38 weather conditions that promote wildfires have become more probable in southern Europe over the last century. Globally, the heat waves and droughts worsening fires have increased too.

Temperatures around the Mediterranean have been 5 to 10 degrees C higher than average this week and dozens of people have died in wildfires tearing across southern Europe and North Africa, most of them in Algeria, where at least 69 people have been killed.

Deaths have been recorded in Turkey as well, which is now also experiencing flooding on the Black Sea coast, leaving at least nine people dead. Parts of Italy and Greece have also been badly hit by fires, where some villages have been largely destroyed, reported CNN.