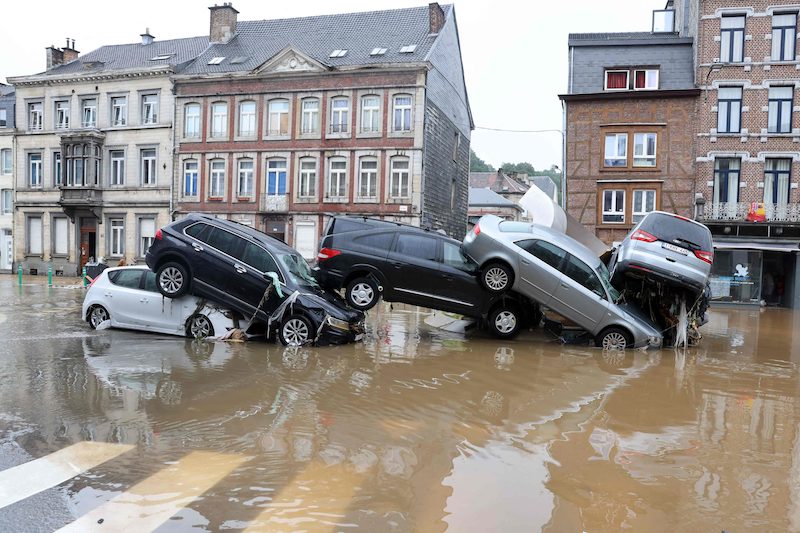 A picture taken on July 15, 2021 shows cars piled up by the water at a roundabout in the Belgian city of Verviers, after heavy rains and floods lashed western Europe, killing at least two people in Belgium. (Photo by Francois WALSCHAERTS / AFP) - LEHTIKUVA / AFP

Over 60 people have died and hundreds are missing in western German states after heavy rains and violent storms in several parts of Europe.

The New York Times reported quoting German authorities that after confirming dozens of deaths, they were unable to account for at least 1,300 people.

The figure was announced after swift-moving water from swollen rivers surged through cities and villages in two western German states, where 58 people were known to have died in the hardest-hit regions and other fatalities were expected.

With communication badly hampered, the authorities were hoping that the missing people were safe, if unreachable. But the storms and the floods have already proved deadly.

At least 11 more people were reported to have died in Belgium, according to authorities who also ordered inhabitants of downtown Liege to evacuate as the Meuse River, which flows through its center, overflowed its banks.

The storms and resulting high water also battered neighbouring Switzerland, the Netherlands and Luxembourg as a slow-moving weather system threatened to dump even more rain on the inundated region overnight and into Friday.

The devastation caused by the severe weather came just days after the European Union announced an ambitious blueprint to pivot away from fossil fuels over the next nine years, as part of plans to make the 27-country bloc carbon-neutral by 2050.

Environmental activists and politicians were quick to draw parallels between the flooding and the effects of climate change.

But the immediate focus on Thursday remained the rescue efforts, with hundreds of firefighters, emergency responders and soldiers working to save people from the upper floors and rooftops of their homes, fill sandbags to stem the rising water and search for the missing.

One of the most heavily hit regions was Germany's Ahrweiler district, where flash floods surged through the village of Schuld, washing away six houses and leaving several more on the verge of collapse. The police said 18 people had died in Ahrweiler district, the NYT reported further.