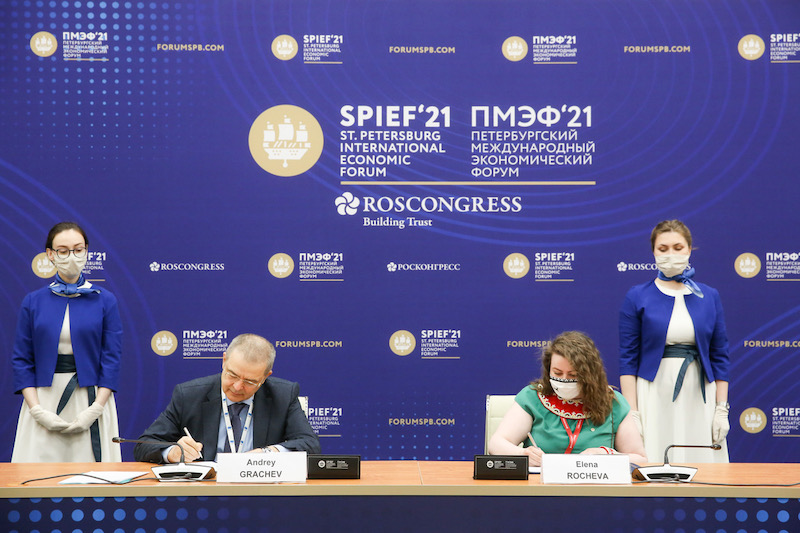 The 24th St. Petersburg International Economic Forum took place on 2–5 June 2021. As in previous years, the business programme focused on the global and Russian economies, social issues, and technological development.

One of the highlights of the conference was the announcement of a 2 billion rubles ($25.9 million) commitment from the Russian mining giant Norilsk Nickel to support the indigenous small-numbered  people of the Arctic. “The company signed an agreement on Saturday to support the Sami in the Russian Arctic, the Murmansk region,” Norilsk Nickel vice president Andrey Grachev said at the St. Petersburg business forum.

“Today Elena Rocheva, head of a Sami organization in the Murmansk region, and the Company signed a new agreement (of support). We understand that our industrial assets are absent in the Sami regions, but we consider it important to do this from the point of view of social responsibility, ”said Grachev.

He noted that these projects are not just financing items in the company's budget, but joint activities that can be effectively implemented only in close contact with communities and families of indigenous minorities, with a common understanding and regular joint discussion.

Earlier it was reported that representatives of the indigenous peoples of the extreme north of Taimyr signed a cooperation agreement with the world's largest producer of palladium and nickel - Norilsk Nickel. These organisations represent over 90% of the indigenous population living in the north of Russia. Norilsk Nickel, together with them, has developed a comprehensive five-year support program in the amount of 2 billion rubles ($ 25.9 million).

“Diesel fuel remains the main source of energy in the Canadian Arctic. We want to move towards more environmentally friendly fuels. Access to broadband internet is essential because its lack deprives small indigenous peoples of the opportunity to participate in the modern economy. Develop transport infrastructure, ”the ambassador said, noting that the main component of the development of the Arctic is international cooperation.

This opinion was supported by the President of the University of the Arctic Lars Kullerud.

“The Arctic Council created our university. The university is also active in Russia. Networked Internet cooperation in the Arctic between different countries has been organised. We are witnessing the success of cooperation in professional training of personnel: doctors, teachers. Training of specialists, including in mining, we cooperate with Norilsk Nickel, which invited me personally several times to his enterprises and I gained experience with the work of Norilsk Nickel enterprises in Russia. This work made a great positive impression on me, ”said Kullerud.

Also, the President of the University of the Arctic called on the Arctic countries to facilitate the exchange of experience, including remotely.

“I am convinced that all specialists should study work in the Arctic and they should be broad-based specialists, including having experience of communicating with the indigenous small-numbered peoples of the North. Special working conditions in permafrost in order to avoid conflicts between the mining company and people. One of the ways is international cooperation, exchange of views, specialists from Canada and Greenland should exchange knowledge with other nations and companies operating in the north of Russia. I am ready to facilitate such cooperation, including network (Internet) interaction of all interested parties, ”said Kullerud.

This year’s forum took place with precautionary strict conditions due to the pandemic with a negative test being a compulsory condition for participation. The forum covered issues from business to health, culture, lifestyle and Fashion in its diverse program.