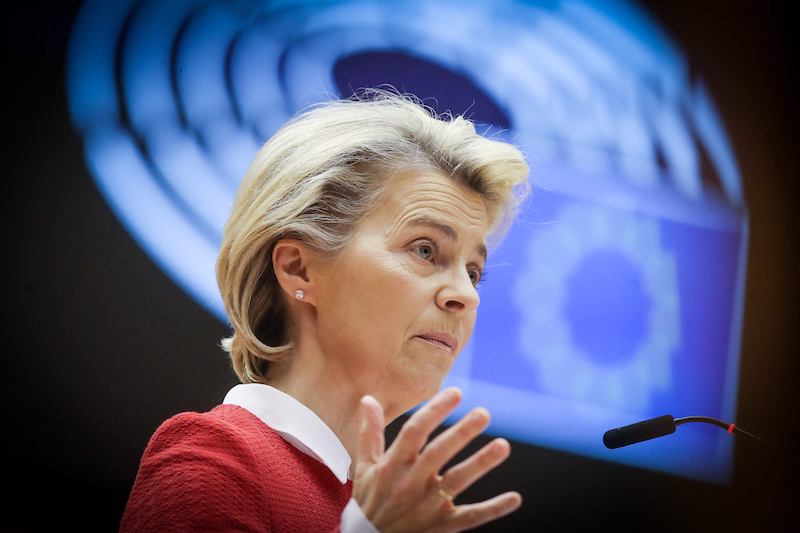 European Commission President Ursula von der Leyen delivers a speech during the debate on EU-UK trade and cooperation agreement during the second day of a plenary session at the European Parliament in Brussels, on April 27, 2021. LEHTIKUVA / AFP

The European Parliament on Wednesday ratified the agreement on trade and cooperation between the European Union and the United Kingdom in a 660-5 vote.

The document must now be approved by EU member states to enter into force officially.

The agreement on trade and cooperation was necessary for regulating relations between the UK and the bloc after the end of the post-Brexit transition period, which expired on January 1.

"I warmly welcome the @Europarl_EN [EU Parliament] vote in favour of the EU-UK Trade and Cooperation Agreement. The TCA marks the foundation of a strong and close partnership with the UK. Faithful implementation is essential," von der Leyen tweeted.

She was joined by European Council President Charles Michel, who pledged further "constructive" cooperation between Brussels and London.

"I warmly welcome the results of the vote by the @Europarl_EN on the EU-UK Trade and Cooperation Agreement. It marks a major step forward in #EU-#UK relations and opens a new era. The #EU will continue to work constructively with the #UK as an important friend and partner," he wrote on Twitter.

UK Prime Minister Boris Johnson has also expressed satisfaction over the approval of the document.

"Great news that the European Parliament has voted overwhelmingly in favour of our zero tariffs, zero quotas Trade and Cooperation Agreement. Now is the time to look forward to a new relationship with the EU and a more Global Britain," Johnson said in Twitter.

The United Kingdom officially left the European Union on January 31, 2020, entering a transition period that lasted until December 31 the same year to give both parties time to negotiate further arrangements and tackle several sensitive topics in bilateral relations. After months of tough talks, London and Brussels managed to reach a serviceable arrangement in the nick of time, on December 24.

In the wake of the separation, the bloc immediately imposed full border controls for goods crossing the English Channel to the continent, with the UK manufacturing and fishing industries complaining that the paperwork and the delays are costing money and potential clients.