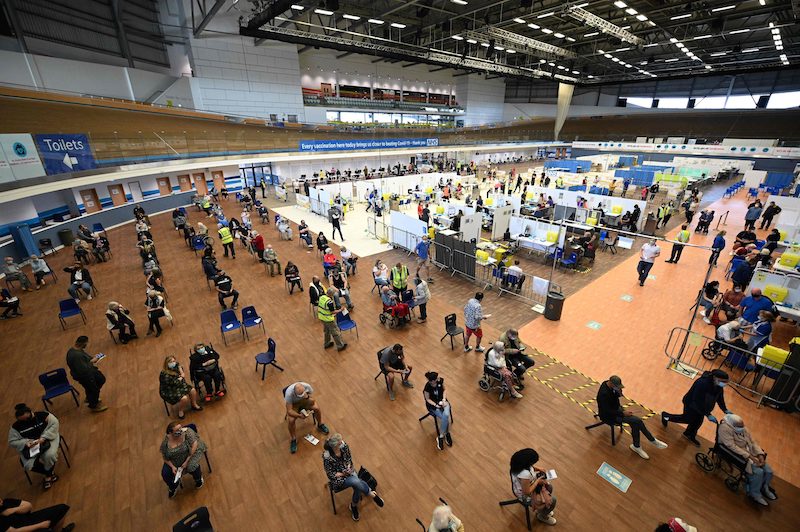 A general view shows various activities as people receive a dose of the BioNTech / Pfizer covid-19 vaccine at a vaccination clinic set up inside the Derby Arena at Pride Park in Derby, Derbyshire on March 31, 2021. LEHTIKUVA / AFP

The rollout of vaccines in Europe is "unacceptably slow," the World Health Organization said on Wednesday, delivering a damning evaluation on the region's Covid response, amid a "worrying" surge in infections.

According to a statement from the body, Last week saw increasing transmission of COVID-19 in the majority of countries in the WHO European Region, with 1.6 million new cases and close to 24 000 deaths.

The Region remains the second most affected by SARS-CoV-2 of all the world's regions, with the total number of deaths fast approaching 1 million and the total number of cases about to surpass 45 million.
"Only 5 weeks ago, the weekly number of new cases in Europe had dipped to under 1 million, but now the Region's situation is more worrying than we have seen in several months. There are risks associated with the increased mobility and gatherings over the religious holidays. Many countries are introducing new measures that are necessary and everyone should follow as much as they can," said Dr Dorit Nitzan, Regional Emergency Director for the WHO Regional Office for Europe.

The statement added that across the region, 50 countries or territories have reported the variant of concern B.1.1.7 -- initially detected by the United Kingdom-- and now the predominant variant in the Region. As this variant is more transmissible and can increase the risk of hospitalization, it has a greater public health impact and additional actions are required to control it.

A total of 27 countries in the Region are in partial or full nationwide lockdown, with 21 imposing nighttime curfews. In the past 2 weeks, 23 countries have intensified restrictions while 13 have eased measures, with an additional 9 to follow suit, according to the WHO

To date, only 10 per cent of the Region's total population has received 1 vaccine dose, and 4 per cent has completed a full vaccine series.

"The risk of ongoing vaccination providing a false sense of security to authorities and the public alike is considerable - and that carries a danger," Dr Kluge explained.

"In past weeks, we've seen both remarkable solidarity across borders in the Region as well as countries hoarding vaccines. Vaccinating healthcare workers and the elderly in every country is everybody's moral responsibility. It is vital that we provide the benefit of this global public good to health- and social care workers," he said.

According to CNN, a weak spot in the EU's program is its heavy reliance on vaccines by British-Swedish drugmaker AstraZeneca. The bloc ordered at least 300 million doses from AstraZeneca, but the company's deliveries have been tens of millions of doses short of agreed quarterly targets.

AstraZeneca has cited lower-than-expected yields from its EU plants as the reason for the shortfall. It "appears to be delivering" to schedule to the UK, which ordered 100 million doses from the company. AstraZeneca has publicly said it is prioritizing the UK market with doses made in the UK, CNN reported.

"While acknowledging the intent of governments to protect their own populations, before the vaccines are extended to other age groups I strongly urge governments to share excess doses of WHO-approved vaccines with COVAX or with countries in need, once health-care workers and the most vulnerable have been vaccinated. Not doing so is self-defeating," said the Regional Director further.