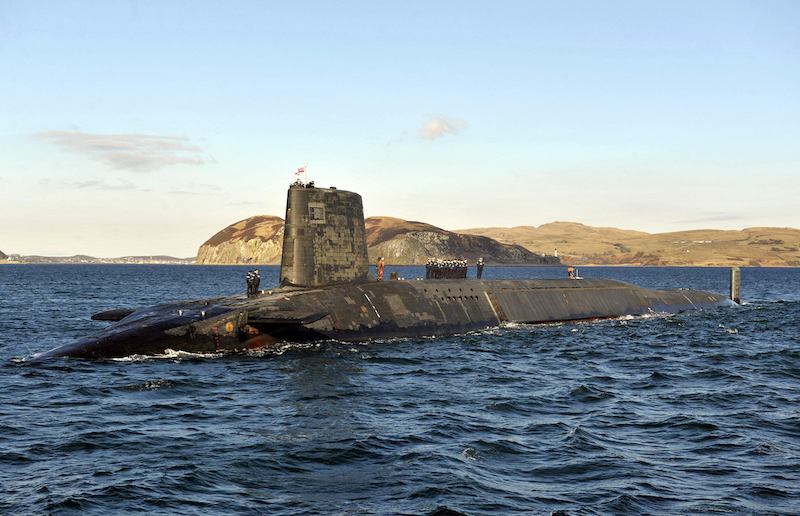 In this file photo taken on April 4, 2013 A picture shows the Trident Nuclear Submarine, HMS Victorious, on patrol off the west coast of Scotland. LEHTIKUVA / AFP

“Following the publication of the UK Government’s Integrated Review of Security, Defence, Development and Foreign Policy, the Scottish Government reaffirms that it is firmly opposed to the possession, threat and use of nuclear weapons – and it is committed to pursuing the safe and complete withdrawal of all nuclear weapons from Scotland,” the Scottish government said in a statement released today.

Britain is lifting the cap on the number of Trident nuclear warheads it can stockpile by more than 40% - from 180 to 260 warheads, Boris Johnson announced on Tuesday last week. This will end 30 years of gradual disarmament since the collapse of the Soviet Union. This would require a £24 billion (€27 billion) investment in response to “perceived” threats from Russia and China.

Ironically, Johnson criticised Iran for increasing its enriched Uranium stockpile in the same speech. Iran has signed the nuclear non-proliferation agreement and does not have any nuclear weapons.

Britain stockpiles its nuclear weapons at Coulport in the Clyde Area in Scotland. The depot consists of sixteen nuclear weapon storage bunkers. Trident missile warheads and conventional torpedoes are stored at the weapons depot, where they are installed and removed from submarines.

The Scottish Parliament, in a meeting on Tuesday 3 November 2015, voted in favour of a motion calling on the UK government to drop plans to renew Trident nuclear weapons.

A review, 'Scotland: A Good Global Citizen A Scottish Perspective on Climate, Defence, Security and External Affairs', was published today. The publication outlines the Scottish Government’s position on a range of key international issues including a desire to engage proactively and energetically with the European Union, resolute support for international development, and a commitment to being a good global citizen.

Cabinet Secretary for Justice Humza Yousaf said:
“Scotland is an open, welcoming nation, internationalist in outlook and committed to working in partnership to tackle global challenges.  We are steadfastly European, and do not want to turn our backs on our closest friends and partners.

“We are determined to enhance and develop this approach. This document – an important restatement of our approach to security, defence, development and foreign policy, which also outlines our strengths such as science, technology and shipbuilding  – reflects that commitment, and indeed our values as a nation.

“The UK Government’s plans to expand the stockpile of nuclear weapons, spending billions on weapons that must never be used, is a lamentable and deeply disturbing response to the rapidly changing challenges of the modern age.

“Indeed the decision to increase the nuclear weapon stockpile is completely at odds with two thirds of the international community who signed the United Nation’s Treaty on the Prohibition of Nuclear Weapons.”

The Scottish government reiterated its position that only independence can give Scottish people the possibility of deciding on their own affairs, including removal of all nuclear weapons from Scotland.

“A steadfast opposition to nuclear weapons is underlined in the Scottish Government’s new assessment of security, defence, development and foreign policy,”

The review also emphasises that Scotland is committed to working with others to tackle global challenges including the climate crisis, migration and human rights.