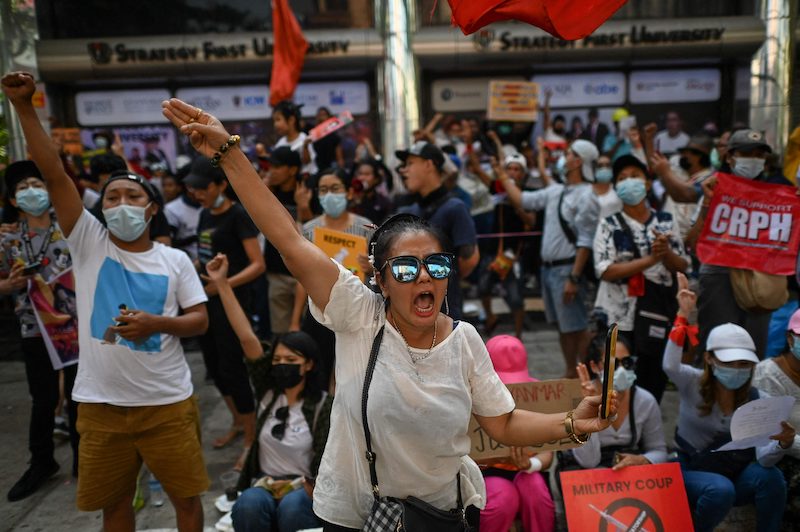 Protesters take part in a demonstration against the military coup in Yangon on February 23, 2021. LEHTIKUVA / AFP

The European Union (EU) has strongly condemned the military coup in Myanmar and is considering sanctions against the individuals responsible for ousting the country's civilian government, the EU Council said on Monday.

"The European Union calls for de-escalation of the current crisis through an immediate end to the state of emergency, the restoration of the legitimate civilian government and the opening of the newly elected parliament," the Council said in a statement published on its website.
The council called for the results of the democratic elections held on November 9, last year to be respected and demanded that the military must renounce its action.

The European Union is "deeply concerned about reports of intimidation". Strong engagement with civil society and support for human rights defenders and journalists will remain a key priority, the council said.

The EU Council also added that it was ready to impose sanctions against the individuals responsible for the military coup.

"In response to the military coup, the European Union stands ready to adopt restrictive measures targeting those directly responsible. All other tools at the disposal of the European Union and its Member States will be kept under review. The European Union will seek to avoid measures which could adversely affect the people of Myanmar/Burma, especially the most vulnerable. The Council invites the High Representative and the European Commission to develop appropriate proposals in this regard," the Council's statement read further.

The Council also said that the bloc will continue to provide humanitarian assistance, in accordance with the principles of humanity, neutrality, impartiality and independence, to refugees and displaced persons in Myanmar/Burma and the region, including the Rohingya, in line with its longstanding engagement and its pledges during the International Rohingya Donor Conference that it co-chaired on 22 October 2020.

"In this context, the EU repeats its call for free and unhindered humanitarian access and stands ready to step up its humanitarian assistance for all needs, if required. The Council reiterates the need to address the root causes of the crisis in Rakhine State and to create conditions necessary for the safe, voluntary, sustainable and dignified return of refugees and displaced persons, in accordance with international standards," the council added.

On February 1, Myanmar's military seized power, announcing a one-year state of emergency and vowing to take action against alleged voter fraud during the November 8 general election, which was won by Suu Kyi's National League for Democracy party.

The military said it was committed to the democratic system and vowed to hold new and fair elections after the state of emergency ended.