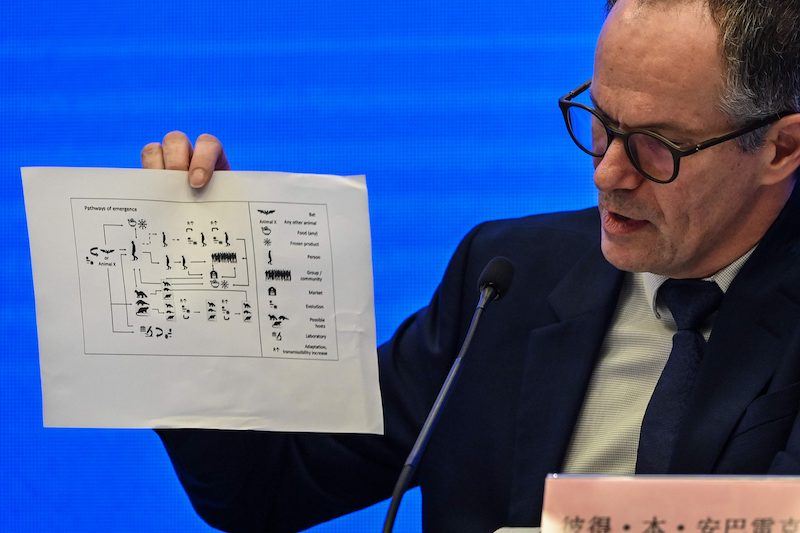 Peter Ben Embarek speaks during a press conference to wrap up a visit by an international team of experts from the World Health Organization (WHO) in the city of Wuhan, in China's Hubei province on February 9, 2021. LEHTIKUVA / AFP

Weeks after a team of World Health Organization experts launched a probe into the origin of the COVID-19 in Wuhan, the global health body on Tuesday said that there is no evidence of coronavirus circulation in any animal species in China.

Speaking at a press conference, Peter Ben Embarek, the head of the WHO mission in Wuhan, stated four hypotheses on how the virus spread but reiterated that "laboratory incident hypothesis is extremely unlikely to explain the introduction of the virus into the human population".
"It has not been possible to pinpoint any animal species as a potential reservoir for this disease, and they indicate that currently and also back in 2019 it does not look like there was the circulation of the virus in any animal species in the country," he said.

He further said that "four main hypotheses or groups of hypotheses" have been identified on how the COVID-19 virus might have introduced among the humans.

The investigation by the WHO was undertaken after a cluster of patients exhibiting pneumonia-like symptoms emerged in Wuhan in December 2019, a new coronavirus was identified to be causing the disease, which later became known as COVID-19, and triggered the global pandemic that infected over 90 million people and killed more than 1.9 million, reported Sputnik.

After the outbreak, then US President Donald Trump blamed China for the global COVID-19 pandemic by calling the new coronavirus "Chinese Virus".

Chinese authorities placed Wuhan and neighbouring cities in Hubei province under strict lockdown for 76 days following the surge in the pandemic. The outbreak since has spread across the world.