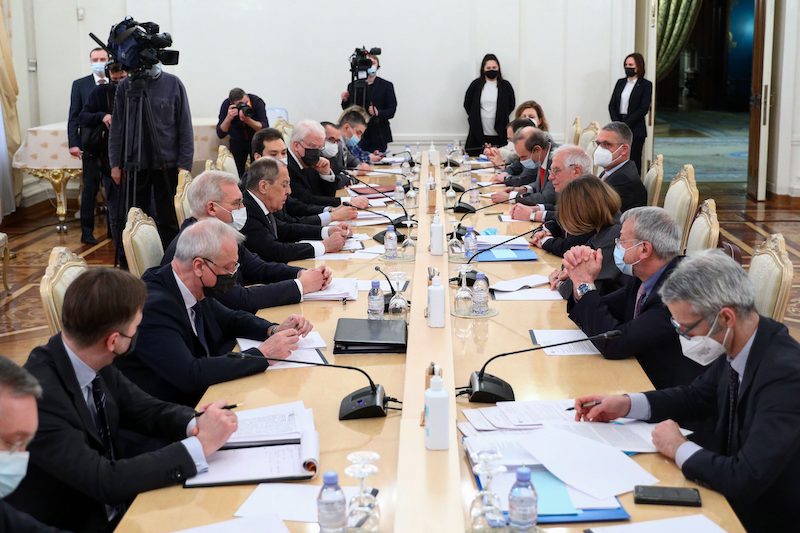 EU foreign policy chief Josep Borrell did not rule out on Sunday that during the upcoming meeting on February 22, EU foreign ministers may take a decision to expand sanctions against Russia in accordance with a new sanctions regime related to violation of human rights.

Borrell visited Moscow from January 4 to 6. During the visit, the EU top diplomat had a wide-ranging discussion on the EU-Russia relations and the global geopolitical landscape with Russian Foreign Minister Sergey Lavrov. He also met with representatives of Russian civil society organizations.
"We will discuss these issues with my fellow EU foreign ministers. As ever, it will be for member states to decide the next steps, and yes, these could include sanctions," Borrell said in his blog.

Borrell recalled that in December, the Council of the EU adopted a global human rights sanctions regime that would allow the EU to impose sanctions on individuals, entities and bodies engaged in human rights violations worldwide.

On February 5, Borrell said at a joint press conference with Lavrov that there had been no proposals on new sanctions against Russian from EU member states so far.

A number of EU politicians have previously said that the bloc would consider again the issue of imposing sanctions against Russia over the situation with Russian opposition figure Alexey Navalny, who was sentenced by a court in Moscow to a 3.5-year prison term in a financial misdemeanor case.

The Russian Foreign Ministry was surprised by the statements made by EU High Representative for Foreign Affairs Josep Borrell following his return from Moscow, as they contradict his remarks at the press conference in Russia.

"Possibly, upon his arrival in Brussels, the EU foreign policy chief was told what kind of highlights he should make, but then this only proves who is actually behind EU policy," a Russian foreign ministry spokesperson told journalists when asked about Borrell's comments on social media.

Borrell said in a blog post after his return from Moscow that "Russia is progressively disconnecting itself from Europe and looking at democratic values as an existential threat." However, when speaking in Moscow, the EU foreign policy chief said that although EU-Russian relations were far from satisfactory, diplomatic channels should remain open.

"We reviewed Borrell's assessments of the visit [to Russia] with surprise, they contrast strongly with his statements given at a press conference in Moscow," a Russian foreign ministry representative told journalists commenting on the remarks.

According to the Russian foreign ministry, Borrell was given an opportunity to give his assessment of the talks in Russia during the Moscow press conference and he used that opportunity. "Nobody limited him either in time or format," the ministry representative said.