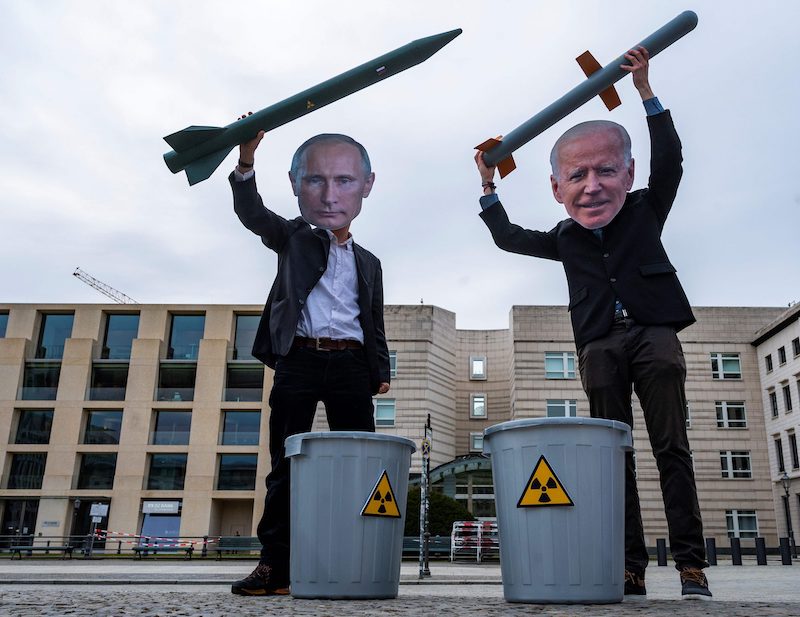 The Russian parliament on January 27, 2021 unanimously voted to ratify an agreement to extend by five years a key nuclear pact with the United States that was set to expire soon. LEHTIKUVA / AFP

The United States on Wednesday extended the nuclear arms control treaty known as the New START with Russia for the next five years.

"Today, the United States took the first step toward making good on that pledge when it extended the New START (Strategic Arms Reduction Treaty) Treaty with the Russian Federation for five years," US Secretary of State Antony Blinken said in a statement.

Blinken added that extending the New START Treaty ensures the US has verifiable limits on Russian ICBMs, SLBMs, and heavy bombers until February 5, 2026.

"The New START Treaty's verification regime enables us to monitor Russian compliance with the treaty and provides us with greater insight into Russia's nuclear posture, including through data exchanges and onsite inspections that allow US inspectors to have eyes on Russian nuclear forces and facilities," he said.

Blinken stated that "during times of tension", verifiable limits on Russia's intercontinental-range nuclear weapons are vitally important. "Extending the New START Treaty makes the United States, U.S. allies and partners, and the world safer. An unconstrained nuclear competition would endanger us all," the US top diplomat said further.

According to The Washington Post, the extension by Washington comes five days after the Kremlin announced that Russian President Vladimir Putin had signed a bill prolonging the pact with the United States. The Russian Ministry of Foreign Affairs said that notes had been exchanged confirming the extension of the treaty for five years.

"Considering the special responsibilities that Russia and the U.S. carry as the world's largest nuclear nations, the decision taken is important as it guarantees a necessary level of predictability and transparency in this area, while strictly maintaining a balance of interests," the ministry said obtained by The Post.

The deal was negotiated between by then-President Barack Obama and Russia's then-president Dmitry Medvedev in 2010, New START came into effect the following year.

The agreement also included a five-year extension clause that allowed both nations to extend the pact with approval from both presidents.

The Post reported that had the United States and Russia not extended the pact, the world would have returned to an era without substantive, verifiable limits on the world's two largest nuclear powers for the first time in decades.

Blinken further in the statement said that Washington has assessed the Russian Federation to be in compliance with its New START Treaty obligations every year since the treaty entered into force in 2011.

The top diplomat added that the US will now set about pursuing an arms-control agreement with the Kremlin that regulates all of Russia's nuclear weapons.

"The United States will use the time provided by a five-year extension of the New START Treaty to pursue with the Russian Federation, in consultation with Congress and US allies and partners, arms control that addresses all of its nuclear weapons," he said.

"We will also pursue arms control to reduce the dangers of China's modern and growing nuclear arsenal. The United States is committed to effective arms control that enhances stability, transparency and predictability while reducing the risks of costly, dangerous arms races," Blinken added.

Former President Donald Trump during his final months along with his administration tried to negotiate a trilateral arms-control deal with Russia and China, but the effort failed after Beijing refused to take part in the discussions.

According to The Washington Post, the Trump administration also told Russia that it would extend New START only on certain conditions, including a commitment by Russia toward addressing its entire nuclear arsenal and getting China involved in arms-control efforts.

The previous administration neared a deal with Russia to freeze the number of nuclear warheads on each side and extend the new START for one more year pending new agreement for expansion of the treaty but the deal "fell apart".

Blinken said that despite engagement with Russia on nuclear matters and other issues of mutual interest, Washington remained "clear-eyed" on the challenges Russia poses to the United States and the world.

"Even as we work with Russia to advance U.S. interests, so too will we work to hold Russia to account for adversarial actions as well as its human rights abuses, in close coordination with our allies and partners," he said.

The Russian Foreign Ministry further said that the extension of New START will be the end of "the trend towards dismantling arms control and nonproliferation mechanisms, so prevalent in recent years due to US destructive policies."

In late last year, the Trump administration left the Open Skies Treaty, which was designed to reduce the chances of an accidental war by allowing mutual reconnaissance flights, also citing Russian violations.

"Significant steps would be required to return our bilateral dialogue in this area back to a more stable trajectory, reach new substantial results which would strengthen our national security and global strategic stability," the Russian foreign ministry said.