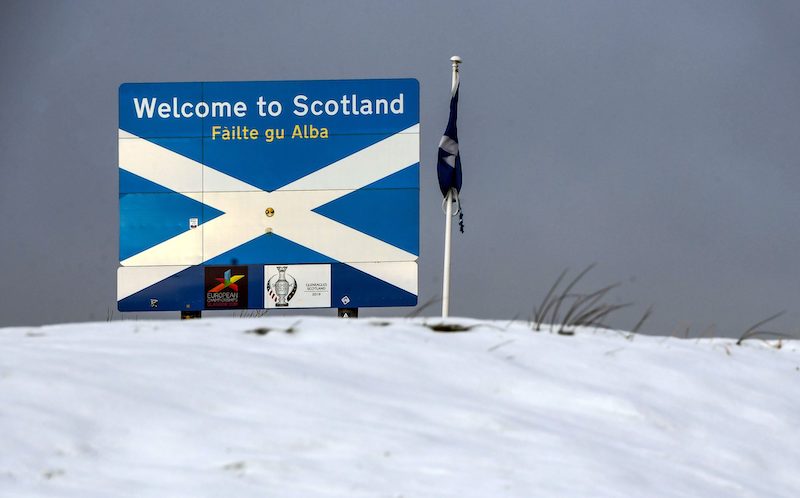 Snow blankets the ground by a sign welcoming drivers to Scotland at the border between England and Scotland near Jedburgh on December 31, 2020. LEHTIKUVA / AFP

The Scottish Government has launched a public information campaign to provide support and guidance following the change in its relationship with the EU. A factsheet published in the context of this campaign, titled: EU-UK negotiations: outcome analysis, details an early assessment of what the outcome of the EU-UK negotiations means for Scotland.

The analysis lays out the challenges presented in mitigating the wide ranging impact of the deal, and underlines why the Scottish Government believes the best future for Scotland is as an independent country within the EU.

“The comparison between the benefits of being a full member of the European Union (EU) and the position after the end of the transition period shows no corner of Scotland’s life and work will be untouched,” says a statement by the Scottish government.

The UK deal, which has been denied consent by the Scottish Parliament, means Scotland will be taken out of the Single Market and the Customs Union on the last day of 2020, hitting jobs and living standards hard.

This initial analysis lays out what Scotland has lost by leaving the EU with this deal – and what it would regain by re-joining - highlighting the impact on Scotland’s economy, trade in services, fisheries, participation in EU programmes, internal security, free movement of people and the environment.

It includes detail on various sectors, including food, for example, where the UK Government has not secured any legally binding protection within the EU of existing UK Geographical Indicators (GIs) - nor any preferential arrangements for the recognition in the EU of potential future UK GIs.

“This analysis is sobering reading for anyone with Scotland’s best interests at heart,” said Scotland’s Constitution Secretary Michael Russell. “Post-Brexit relationships with the EU could have taken many different forms and the damaging outcome with which we are now faced is the result of a political choice by the UK Government, and firmly against the wishes of Scotland.”

“As a responsible government we are doing everything we can to mitigate against the consequences of the UK Government’s actions, but we cannot avert every negative outcome.”

“We know that businesses are already struggling under the burden of COVID-19, and are now faced with the need to prepare for the economic shock of this hard Brexit,” Russell added.

“Our position is clearer than ever – Scotland now has the right to choose its own future, as an independent country and seek to regain the benefits of EU membership.”

“This analysis demonstrates the substantial benefits that we would regain by becoming an independent member state in our own right.”

Running from the 1 January until the end of the month across radio, print, digital and social channels, the campaign signposts the public to mygov.scot/euexit for further information.

The analysis of the deal’s impact can be read online.

The Scottish Government has also published analysis of the deal on fishing which shows for some key Scottish stocks the UK deal is worse for the industry than the EU Common Fisheries Policy.