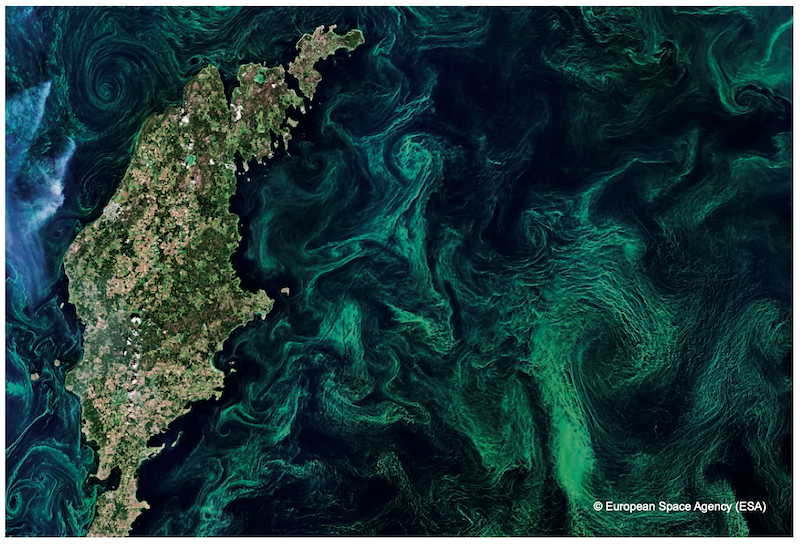 An algal bloom in the Baltic sea captured by the Copernicus Sentinel-2 mission satellites.

“The findings are clear: Our relationship with nature is broken.

Biodiversity – the rich diversity of life on Earth – is being lost at an alarming rate. This loss effects our own health and well-being. Today, catastrophic impacts for people and the planet loom closer than ever,” says the WWF Living Planet Report 2020.

The population sizes of mammals, birds, fish, amphibians and reptiles have seen an alarming average drop of 68% since 1970, and 75% of the planets ice free land surface has been significantly altered by human activity.

Latin America and the Caribbean most affected

Biodiversity loss across Latin America and The Caribbean is far greater than that of any other observed region, with an average of 94% population decline. This is due to a range of factors, including the conversion of grasslands, savannas, forests and wetlands, the overexploitation of species, climate change, and the introduction of alien species. The biggest declines are among populations of fish, reptiles, amphibians. For freshwater fish this is mostly due to overexploitation, for reptiles it is also due to habitat loss and for amphibians disease is the biggest threat. In Panama for example, the chytrid fungus caused the extinction of 30 amphibian species.

The Europe-Central Asia region has one of the highest consumption footprints of any of the region. It also exceeds its biocapacity - the natural supply of nature’s resources and services - by the largest amount.

However, the 24% average decline in populations here between 1970-2016 is smaller than any other region, partly thanks to successful conservation.

The report also covers the growing problem of alien species . “Alien species numbers are rising unabatedly, having increased by 37% since 1970 without signs of saturation. Invasive alien species pose major threats to global biodiversity, ecosystem services and human livelihoods. Consequently, there is an urgent need to project and evaluate future trajectories of their accumulation, abundances and impacts, which are currently absent from global biodiversity modelling initiatives .”

The report is a collection of publications by experts of different fields with deep insight into different aspects of the problem, from environment to society and economy. One paper written by Dominic Waughray and Akanksha Khatri of the World Economic Forum lists the top global risks of 2020 as: Extreme weather, climate action failure, natural disasters, biodiversity loss, weapons of mass destruction and water crisis.

The entire report can be found here.