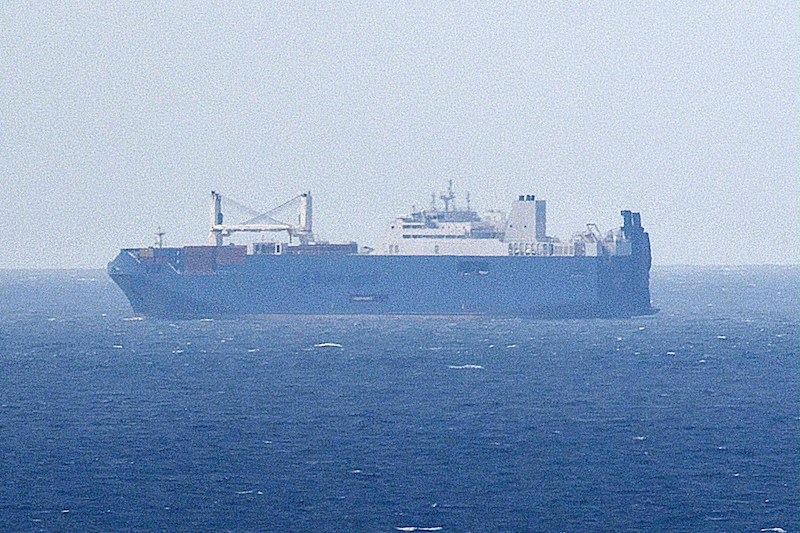 A picture taken on May 9, 2019, shows Saudi cargo ship Bahri Yanbu waiting in the port of Le Havre. - French President defended his country's arms sales to Saudi Arabia and the United Arab Emirates on May 9, 2019 as campaigners focused attention on a new shipment set to leave from the northern port of Le Havre. Human rights groups have regularly denounced France for continuing to supply the Gulf states despite allegations of war crimes and civilian deaths during their military operations in neighbouring Yemen. LEHTIKUVA / AFP

According to the EU’s reporting on arms exports, EU member states issued at least 607 licences worth over 15.8 billion euros to Saudi Arabia in 2016. The main European exporters of conventional arms to Saudi Arabia include the UK, France, Spain, Italy and Bulgaria. Between 2013 and 2018, Saudi Arabia accounted for nearly half of the UK’s and a third of Belgium’s arms exports. Other countries – including Germany, the Netherlands and Norway – have started to restrict weapons sales to the Saudi and UAE-led coalition.

Reacting to the onward voyage of the Saudi Arabian state shipping company’s vessel, the Bahri Yanbu, from the Spanish port of Santander this afternoon, Ara Marcen Naval, Deputy Director for Arms Control and Human Rights at Amnesty International, said:

“Laden with arms that will likely be used in the war in Yemen, the Bahri Yanbu has been bouncing off European ports like a pinball. After loading up with Belgian munitions in Antwerp, it has visited or attempted to visit ports in the UK, France and now Spain, and is due to dock at the Italian port of Genoa later this week.

“This is a serious test of EU countries’ resolve to uphold their obligations under the Arms Trade Treaty (ATT) and EU Common Position on Arms Exports. Several states have failed this test in the space of just a few days.

“No EU state should be making the deadly decision to authorize the transfer or transit of arms to a conflict where there is a clear risk they will be used in war crimes and other serious violations of international law.

“The Bahri Yanbu's voyage reminds us that states prefer to allow the lucrative global arms trade to continue to operate behind a veil of secrecy. But this veil is not impenetrable, and Amnesty International and its partners will continue to closely monitor developments and denounce states for flouting their international legal obligations.”

In Yemen, the Saudi Arabia/UAE-led Coalition has used arms imports to contribute to thousands of civilian deaths and injuries, including as a result of attacks that violated international humanitarian law. This has exacerbated the world’s worst humanitarian crisis, where 2.2 million people have been displaced and 22 million people are in need of humanitarian assistance

According to a published export schedule for Saudi Arabian state-owned shipping vessels, the Bahri Yanbu set sail from Corpus Christi, USA on 2 April 2019, destined for Jeddah in Saudi Arabia. It then called at several other US ports and one Canadian port before crossing the Atlantic and stopping in Germany, Belgium and the UK in early May.

On 3 May, it was reportedly loaded with six containers of Belgian-manufactured munitions at Antwerp, before continuing on to France. It was due to dock at the French port of Le Havre to receive additional arms on 8 May, but following legal action by French NGOs and increased public scrutiny, it continued its voyage without stopping in France, and made an unscheduled stop at Santander in northern Spain on 12-13 May. Its next scheduled port of call is in Genoa, Italy, originally planned for 16 May.

Amnesty International activists in Belgium, France, Spain and Italy have been monitoring the Bahri Yanbu’s voyage around Europe. The activists have joined protests and co-authored a letter to the Spanish authorities to call on them not to authorize its transit through Spanish waters. The organization will highlight the apparent ATT and EU Common Position violations at a 17 May meeting of the European Council’s Working Party on Conventional Arms Exports.