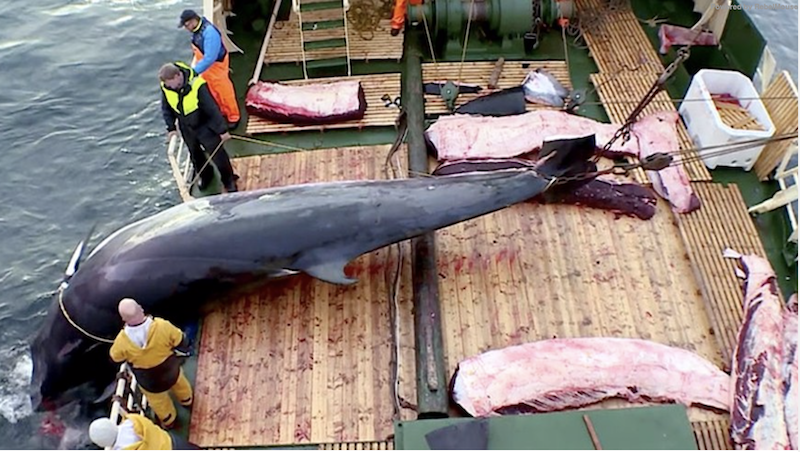 The documentary, Slaget om kvalen ("Battle of Agony"), shows grisly footage of Norway's whaling industry, including one bloody scene where a fisherman cuts open a whale and removes its fetus.

Six Russian ecological organisations have submitted an official letter addressed to António Guterres, the Secretary-General of the UN and Harald V, the King of Norway, asking them to stop or limit the quotas for whale fishing.

The letter makes a strong point that Norway is the only country refusing to accept the moratorium on whale fishing declared by the International Convention for the Regulation of Whaling, arguing that it is a historically established national tradition.

Simultaneously, Norway, Denmark, Iceland and Japan are the top ranking countries in whale meat export. Ironically all of them proclaim environment-friendly politics.

Oslo remains the world’s leading exporter of whale meat and evidently benefits from it economically. Thus the environmental protection claims and words by the nordic country and its actions are not inline.

Ninety percent of the minke whales hunted and killed each year in Norwegian waters are female and " almost all" of them are pregnant, according to a documentary aired in March 2017 on NRK, a government-owned public broadcasting company. For that reason, zoologists believe that this business is ecologically catastrophic and against the norms of humanism. “From their perspective, it sounds rather like a crime against nature and puts whales into real danger” says one of the scientists. A twist to worse is that Norway recently declared an increase of the annual quota for whale fishing. This news served as grounds for Russian ecologists to ask the UN to use its authority to change this business or limit it.

Scientists believe that whales are intelligent mammals and their minds are similar to that of dolphins, adding more bitterness to the already sad story. “The extermination of intelligent animals doesn’t sound like an environmental protection policy by any means”, says one of the Russian authors of the letter.

Unfortunately, whale fishing being a driver of its economy, without public support and influential organisations like the UN, it’s extremely hard to influence the country’s activities.