HEADS OF STATE, Nobel laureates and foreign policy experts recently gathered at a secretive conference in Astana, Kazakhstan, for the unveiling of a “Global Risk Report” identifying the greatest threats to world stability in 2019.

The conference, known as the Astana Club, took place in the Kazakh capital on November 12-13 and was the fourth such annual conference to be held. Participants included the heads of state and former heads of state of Belgium, Portugal, Pakistan, Turkey, Poland, Egypt, and Croatia, as well as dozens of leading foreign policy figures and Nobel laureates.

The Astana Club abides by so-called “Chatham House rules” which mandate that the opinions of participants remain anonymous for the purpose of debate. The event took place in the Nazarbayev Centre in Astana and was chaired by the president of Kazakhstan, Nursultan Nazarbayev.

The key themes of the 2018 Astana Club were “Global Risks for Eurasia in 2019” and “Toward a Greater Eurasia: How to Build a Common Future”. The focal point of the event was the unveiling of the Global Risk Report, which was compiled with the input of 1000 leading figures in politics, economics, conflict, and international relations representing 60 countries. 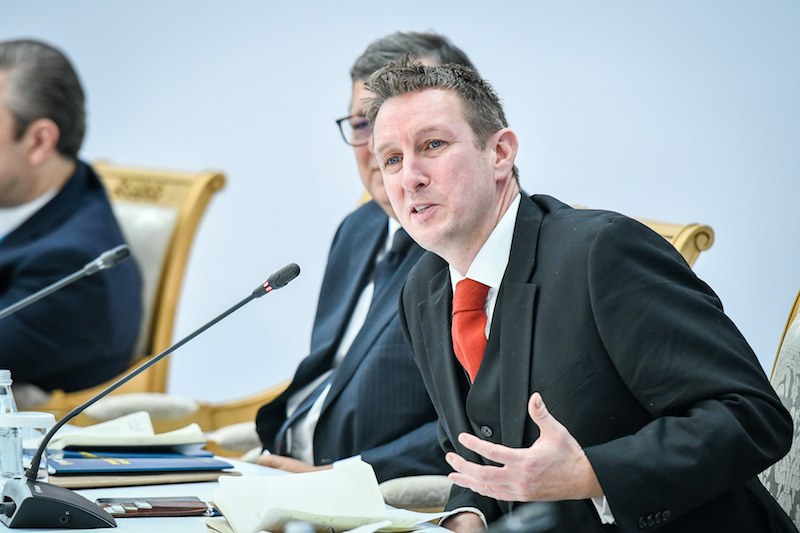 The rules of the conference mean that it is unclear which global figures made these particular predictions, but we know that they were informed with data provided by dozens of government bodies and think tanks.

In a closed-door meeting, the president of Kazakhstan introduced the report by remarking “we haven’t observed such levels of confrontation in a very long time… the so-called multi-polar world order is being left in the past”.

He went on to say that “the changing balance between global players” threatened to bring about large-scale military conflict in the year ahead.

Nazarbayev also concluded his speech with a pointed warning to the United States, China, and Russia, saying “it is necessary to realise that misunderstanding and miscalculation in crisis situations invariably leads to military confrontation”.

The report also calculated that cyber-attacks similar to the 2017 WannaCry incident allegedly perpetrated by North Korea will cost governments as much as $1 trillion in 2019. It was also predicted that the cost of trade wars, particularly between the US and China, may be as high as 17% of global GDP, a level last seen during the Great Depression.

All of this will likely affect prosperity in the West, with mounting signs of an economic slowdown already becoming clear.

The 1000 experts consulted for the report were also asked to give their opinions on the likelihood of certain scenarios being realized next year. These opinion polls made for similarly grim reading:

Economy inequality, which is already at its highest level since 1929, is predicted to reach record highs in 2019, further fuelling global instability.

It was also widely predicted that America’s withdrawal from the Iran Nuclear Deal will greatly increase the likelihood of a “large-scale war in the Middle East” before the end of next year. Other flash points for concern include rising tensions in the South China Sea, where China is currently building military installations on disputed territory.

Of particularly great concern throughout the conference was the state of European unity, with fears that it may “unravel” in the year ahead. Chairperson of the Kazakh Senate's Committee of International Relations, Defence and Security and daughter of the president, Dariga Nazarbeyeva, used her speech at the conference to draw attention to the implications of a divided Europe.

“European unity is at its weakest point in decades… Brexit, the migration crisis, the aggravation of contradictions between older and newer members of the EU, and the emboldening of Eurosceptics… tests the strength of Europe”.

Those present at the Astana Club also listed a number of “recommendations” to mitigate the risk of global conflict in 2019. One of the boldest suggestions put forward by several former heads of state was to introduce an “updated version” of the 1975 Helsinki Accords, in which the Western world first agreed to improve relations with the Soviet Bloc.

A contemporary version of the Helsinki Accords would include strengthened pledges concerning nuclear non-proliferation and would be aimed at improving relations between the United States, China, Russia, and the European Union.

Other recommendations included the creation of a “Central Asian Schengen Area” that would provide visa-free travel between Kazakhstan, Uzbekistan, Kyrgyzstan, Tajikistan, and Turkmenistan.

It was also suggested that China’s controversial “Belt and Road” infrastructure initiative, which links China to the region and with Europe, be taken advantage of as a vehicle for cooperation.

Whether these suggestions will amount to anything concrete remains to be seen. What the 2018 Astana Club meeting does reveal is the immense levels of anxiety felt by world leaders at this current point in time. The predictions made in the Global Risk Report, and the responses to them, suggest that the world is on the verge of serious economic and political catastrophe.

The decisions made in the year ahead may affect global peace and prosperity for a generation. As Ahmet Davutoglu, the former prime minister of Turkey said in his closing speech; “now is an absolutely critical time for humanity”.