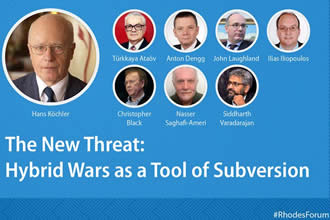 This years WPF tackled hybrid warfare and the disorder shadowing our world today.

“13” is the bad luck number in some cultures. Even architects and scientists try to go around it, just in case; to the extent that high rise buildings in North America skip the 13th floor, so after 12th floor, comes 14th!

But not for The World Public Forum on Dialogue of Civilisations, held in Rhodes, Greece every autumn. This year’s forum, number 13, was indeed the best ever.

For those who have only been exposed to the Western point of view of the world affairs, Rhodes forum is a breeze of fresh intellectual air full of oxygen; full of new ideas and important questions. Being able to ask the right questions is essential. Answers will be found.

The forum is founded by Dr. Vladimir Yakunin, who just left the director position of the Russian Railways. He is a close friend of Pres. Vladimir Putin and included in the list of those sanctioned by the United States, but not the EU. To some, this could make the forum less credible. To me its a great opportunity to hear the other side of the story. only then one can make up his mind on affairs where interests collide.

One other factor, which would give solid credibility to the forum, is the impressive list of speakers and the high quality of topics discussed. This year’s main theme was “The World Beyond Global Disorder”  which we all agree is the menace of our time.

In his opening remarks, Dr. Yakunin, who for a decade led Russian Railways, one of the world’s largest transport companies, said that it was his intention to devote the majority of his time to WPF “DoC” as it moves to the next stage of its development. He also announced the launch of a major new global think tank, based on the foundation laid by the organisation over the past 13 years.

McKinney may be a controversial figure in the United States, but controversy is the least you get if you are a black anti-establishment woman in America. McKinney, during her congress terms tried to make the CIA disclose classified documents about the assassinations of President Kennedy, Martin Luther King and even rapper Tupac Sakur, of course with no results.

She started her speech by quoting President Kennedy’s remarks about peace: “What kind of peace do I mean and what kind of a peace do we seek? Not a Pax Americana, enforced on the world by American weapons of war; not the peace of the grave or the security of the slave.  I’m talking about genuine peace:  the kind of peace that makes life on earth worth living; the kind that enables men and nations to grow and to hope and build a better life for their children; not merely peace for Americans, but peace for all men and women; not merely peace in our time, peace in all times.” Kennedy had said just weeks before his assassination in broad daylight in front of the world audience.

“Can you even imagine a President of the United States speaking as President Kennedy spoke on that American University campus? Probably not.  And the reason is that when that bullet blew our President’s brains out, U.S. elected leadership for peace was eliminated.” McKinney continued.

Alfred Gusenbauer, former Federal Chancellor of Austria, started his speech by commenting on the disorder shadowing the present time. “Why is the present disorder so frightening for many?” Asked Gusenbauer. “It is the result of multiple and simultaneous transformation of the world.” In addition to the shift from a unipolar to a multipolar political environment, he mentioned the change in the players: “We are in a transformation from a situation mainly characterised by states, to one where non-states actors, both positive ones, such as the civil society and negative ones, such as terror organisations are gaining more power.”

Other sessions of the forum dealt with topics such as: Financial and Economic Policies for Inclusive and Equitable Development, moderated by Richard Werner, Professor of International Banking and the founding director of Centre for Banking, Finance and Sustainable Development of the University of Southampton Business School.

This Session discussed shortcomings with the post-war approach to international economic development within our current global financial architecture, in order to propose an alternative development paradigm that is more inclusive and more equitable. Among speakers were Karl-Theodor von und zu Guttenberg Minister of Defence (2009-2011), and Minister for Economics and Technology (2009) of the Federal Republic of Germany.

“The World Beyond Global Disorder” session was moderated by Prof. Fred R. Dallmayr from USA, a veteran and Co-Chairman of WPF "Dialogue of Civilizations"; Packey J. Dee Professor of the Departments of Philosophy and Political Science of the University of Notre Dame.

– How can we overcome the present disorder? Are there alternatives to the present chaos? How can we find pathways pointing in the direction of a more just and sustainable world order?

Among the keynote speakers of this session were Richard Falk, Milbank Professor of International Law, Princeton University and Research Professor, University of California, Santa Barbara. His topic was “A New Geopolitical Realism for the 21st Century”

Two of the most interesting speeches of the forum were delivered by Ali Allawi, formerMinister of Finance (2005-2006), Minister of Trade (2003-2004) and Minister of Defence (2004) of the Republic of Iraq, and John Laughland, Director of Studies of the Institute of Democracy and Cooperation, Paris, France who talked about “Hybrid Wars and the Return of the Political”.

Dr. Alawi, in his remarks in the session titled “Which Way WANA?” (WANA: West Asia and North Africa, is the name used for the area later called the Middle East by the western countries) questioned the future of sovereign states in the area, referring to Syria, Iraq, Libya and Lebanon. “There is now a convergence of very powerful, destructive forces in the area, which if not tackled, and tackled head on, could really threaten the area in an existential way and is going to have catastrophic global consequences,” Dr. Alawi mentioned. He also warned about the destructive role of the Saudi “aggression pact” in Yemen and Iraq, and the active dissemination of Wahhabism by the Saudi rulers.

“Saudi Arabia is dealt with as a state, which has a Princeton educated foreign Minister and highly articulate princes and whole series of corporate captains of industry. So this is one aspect of it. The other aspect that we have had to face in the Middle East, is that in Iraq we have had 45,000, I repeat 45,000 people killed as a result of suicide bombings to very very large extent fermented by this kind of (Wahhabi ideology) thinking. This is an unspoken genocide,” said Alawi.

John Laughland’s fascinating presentation about hybrid wars started with reiterating that the term was coined by the American military and that the topic was wide and challenging to cover. Hybrid war, also called “Full Spectrum War” would employ “ a tailored mix of conventional, irregular, terrorism and criminal means or activities in operational battle space,” he went on quoting the United States Joint Forces Command’s document.

Laughland called the accusations such as the one made by deputy secretary general of NATO, that Russia engaged in a hybrid war in Ukraine a paradigmatic case of “the pot calling the kettle black.” He mentioned accusations of Russia using “internet trolls” as one example of this kind: “We have known even before Edward Snowden, that the United States does the same thing. The Guardian revealed in 2011, that the Pentagon had concluded a contract with a Californian corporation to set up an ‘online persona management service’, I quote, ‘which would enable one US serviceman or woman to control over 10 separate identities based all over the world in different chat forums’.”

Laughland went on to bring several examples of how the US and British secret services had developed mechanisms of suing the social media and online videos for regime change purposes.

In its concluding remarks, the WPF DoC declared that: “During the 2015 Rhodes Forum Special attention was paid to West Asia and North Africa (WANA). Wars are raging in at least four countries in the region, tens of thousands of people have been killed, and millions more have left their homes in fear for their life. The rise of terrorist outfits such as Al-Qaeda, ISIS, and Jabhat al-Nusra – targeting Muslims and non-Muslims alike – suggests that the world is facing a battle against barbarism, not a clash of civilizations. Fighting the barbarians who slaughter innocent men, women and children is a battle for civilization – for ancient ways of life, ancestral homeland, millennia-old traditions and different faith communities such as Oriental Christians and the Yazidi who confront an impossible choice: forced conversion, expulsion or death. We are convinced that such and similar conflicts cannot be solved by military means alone but require political settlements that reflect cultural realities. We echo Pope Francis’ recent words that ‘war only brings destruction and multiplies suffering, while hope and progress can only come from peace. The concerned parties should broaden their horizons beyond the immediate interests and use international law and diplomacy to resolve current conflicts’.”

Video recordings of the keynote speeches and the plenary sessions of WPF DoC 2015 can be watched online here.