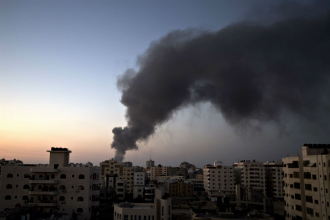 Israel and the Palestinians were to resume talks in Cairo on Monday after agreeing to a new cease-fire, while a prominent Israeli cabinet member proposed that negotiations be expanded with a view toward eventual peace with all Arab nations.

The three-day cease-fire, which began at midnight Sunday in Israel and the Gaza Strip, followed another long, anxious day in which the warring sides exchanged rocket and missile fire. The armed wing of Hamas, which runs Gaza, lobbed a last rocket at Tel Aviv just minutes before the temporary truce began.

A previous 72-hour cease-fire crumbled Friday when Islamic Jihad and other militant groups in Gaza sent rockets into Israel. Those attacks caused the Israeli delegation to walk away from the Cairo talks, saying they would not negotiate while Israel was under fire.

The talks, in which Egypt is acting as a go-between, seek a more durable truce in a war that has raged for a month. More than 1,900 Palestinians have been killed in the fighting, many of them civilians. Israel has lost 64 soldiers and three civilians.

Egypt's Foreign Ministry issued a statement Sunday urging "both sides to exploit this truce to resume indirect negotiations immediately and work towards a comprehensive and lasting ceasefire agreement."

Operation Protective Edge is Israel's third major battle with Hamas in six years. And some in Israel's political and defence establishment are suggesting that the cycle can be broken through diplomatic initiatives.

They argue that for a host of reasons — the threat of a nuclear Iran, the implosion of Syria, the rise of political Islam — Israeli interests align with those of some other countries in the region, making a grand bargain possible. However, others say the Middle East is too beset by upheaval to make such overtures realistic and so it is better to wait and see what develops.

One of the proposals comes from a heavyweight who straddles the worlds of defence and politics, Yaakov Perry. He is a former chief of Israel's security service, the Shin Bet. He is a member of parliament from the secular Yesh Atid party and the minister of science, technology and space.

In an interview with The Washington Post on Sunday evening, Perry said Israel should propose that the talks in Cairo become regional in composition and aspiration. He suggested inviting Egypt and Jordan, the two Arab countries that have peace treaties with Israel, as well as Saudi Arabia and several Persian Gulf states that share an interest in combating Islamist extremists.

Perry envisions focusing the Cairo talks on the humanitarian crisis in Gaza, where Israeli airstrikes and artillery attacks have destroyed thousands of homes and much of the infrastructure. When that phase is completed, he said, the talks could expand to seeking a resolution to the decades-long conflict between Israel and the Palestinians.

"Let's take the Saudi initiative, and we will try to negotiate a plan to bring an end to the Israeli-Arab dispute," he said, referring to a peace plan proposed by Saudi Arabia in 2002 and later embraced by the 22-member Arab League. "Inside this framework, it will be easier to deal with [the] Palestinians on bilateral negotiations, which have failed."

He said this is the first time a member of the Israeli government has publicly endorsed basing talks on what became known as the Arab Peace Initiative, which offered Israel normalised relations throughout the Arab world. But it was a take-it-or-leave-it deal, entailing concessions too painful for Israel to accept, such as a withdrawal from the occupied territories, including East Jerusalem, and "a right of return" for Palestinians who fled when Israel was founded in 1948.

US Secretary of State John Kerry tried to revive the Arab initiative when he restarted peace talks last year, and he won support from Arab League members for a solution that could include "land swaps." Prime Minister Benjamin Netanyahu, however, was cool to the initiative at the time.

"Israel does not need to accept the contents of the initiative in its entirety, and there are major issues which should be discussed in depth," Perry wrote in an outline of his plan. "However, the time has come for Israel to recognise the importance of this step, declare its readiness to begin a discussion on the initiative and take steps to leverage it for local and regional strategic advantages."

Perry said he had outlined his plan to Netanyahu, who he said responded favourably to it.

"Ninety, 95 per cent of it can be accepted without any opposition," he said. "The rest, it will be discussed."

Perry acknowledged that his proposal would meet stiff opposition. While Israel would demand security assurances, he said, in return it would make concessions on some core issues.

"The principle I propose is — 'The Palestinians will receive only if the Arabs give,' " he wrote in his outline.

For example, he said, "Israel will stop the construction in the settlements, stop investments in the West Bank, and help the Palestinian Authority improve daily life and the processes for building the future state."

He said it would take years, perhaps decades, to overcome the suspicions and distrust that took many more decades to build.

"People are sick of all this," he said. "I wouldn't call it desperation, they're seeking a solution. They're seeking hope for a better future."