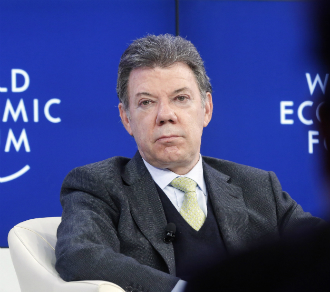 Juan Manuel Santos, sworn in for a second term as president of Colombia on Thursday, campaigned for re-election on his vision of ending the country's decades-long civil conflict and negotiating peace with the Revolutionary Armed Forces of Colombia (FARC) guerrilla group. But the country is so divided over the peace talks that Santos finished second in the first round of voting. In an interview just before his inauguration, he discussed the prospects for peace and the war on drugs. Excerpts:

You staked your re-election on the peace process.

Yes. Quite frankly, my main reason to seek re-election is the possibility of ending a conflict that has had devastating effects for 50 years.

Former president Alvaro Uribe was attacking you during the campaign, saying you are selling out the country.

The people who — for some reason that I still don't understand — don't want peace managed to sell the idea that we are selling the country to communism, that the FARC would take over. I made a mistake thinking people would not believe that because it was so outrageous, but when I realised that they were believing it, I had to react. Fortunately, we won.

What are the elements of your peace process?

There are five points. One is what we call "rural development." There is land in Colombia, fortunately, for everybody. We don't have to expropriate land from people who are cultivating that land legally. What we are doing is taking the land from the people who grabbed it through violence.

Only 1 per cent of the people control most of the land?

There is a lot of inequality in Colombia. We have to correct that. What I am going to do is to give land to peasants who don't own land, because there is still a huge amount of land that has not been cultivated because of the conflict. We have to conquer half of Colombia.

You are talking about giving the FARC some political participation if they lay down their arms?

Of course. The peace process is precisely to achieve that. Instead of them trying to gain power through the use of violence, they [should be] incorporated into the democratic system and try to persuade people to vote for them. I will allow them to become a political party. They are already convinced that through violence they will never achieve any of the objectives that they have.

But meanwhile, the violence has escalated.

It hasn't escalated. It continues. Because I put a condition when I started this process that there will be no cease-fire until we reach an agreement. In the past, every cease-fire was taken advantage of by the FARC to renew and rearm. We have learned. So we are talking in the middle of the war.

Do you feel you have diminished their strength?

So the third negotiating point is?

Drugs. I insisted we need the commitment of the FARC to end any relations they have with the cultivation and trafficking of drugs and to help us in our war against drugs. And they accepted. This is remarkable.

They accepted that together we will start a program to eradicate drug trafficking in Colombia. Instead of putting mines around the coca plants that blow up our soldiers and policemen, and instead of having sharpshooters killing the people who eradicate the coca, they will help us in substituting legal crops for illegal drugs.

Colombia has been the most important provider of cocaine to the US for 30 or 40 years. So can you imagine the effect this will have?

Now the talks are on the topic of victims.

We — the government and I — have decided to put the victims at the center of the solution of this conflict. We have more than 6 million victims. Their rights must be respected and taken into account.

What will you pay the victims?

Where do we draw the line between peace and justice?

What is your answer?

We want as much justice as possible that will allow us to reach peace. And this is what we have to negotiate.

If I'm a FARC leader, I'm not going to turn myself in if you're going to put me in jail for the rest of my life.

That's one extreme. The other [is the] victim saying: "You must go to jail because you killed my father."

Exactly. So where do you draw the line?

I cannot give you that answer. I have to give this answer to people at the negotiating table.

A commander might be guilty but not all the FARC?

Exactly. You cannot judge and condemn 8,000 people. It would take you 100 years. So you have to choose the [most] responsible. Those people will be judged and condemned, people who are really at the top and are responsible.

The people responsible for the very worst crimes?

And that will be very difficult?

Not so difficult. We have vast experience with that. More than 50,000 armed people have demobilized in Colombia in the last 10 years.

What are you going to do about former president Uribe? Will you have a peace process with him?

You were his minister of defence.

I was the most effective minister of defence against the FARC and the ELN [National Liberation Army] that the country has had since the FARC was created, and he knows it. He thought I was going to be his puppet, and he discovered I have my own way of thinking. And he was very upset, but that's the way the cookie crumbles…

Hopefully Uribe will understand there is no greater objective for any society than to reach peace. He should be the first to understand this because he has been a victim of the FARC. His father was killed.

Do you plan to talk to him?

He doesn't talk to me. If I talk to the FARC, how can I not talk to Uribe? I am more than willing to sit down and straighten things out. So far I haven't received any positive answer.

You have said that if you finalise the peace process, you will hold a referendum to seek the approval of the citizens of this country.

Everything that we negotiate will be put to the people to decide. I'm not going to negotiate something that the people will reject because I would be committing suicide. We will then need to convince the people. We need to have the whole package to appreciate what peace will bring. If you start putting it to the people point by point, they will automatically reject it. But when you have the whole package — this is the cost of peace, and these are the benefits of peace — people will go for the benefits.

What do you think the benefits of peace would be ?

Enormous. One example is our growth rate. Most economists calculate we will grow at least 2 per cent more per year forever without the conflict. A society that has been at war for 50 years — can you imagine if we can heal the wounds and work together? Can you imagine what we can do?

You had a high growth rate at the beginning of this year.

We are the country in Latin America that is growing fastest. And in the first quarter, our growth rate was the second in the world after China. We have brought unemployment down for 47 months in a row. And this is in the middle of a war.

I notice the Colombian people are more worried about crime than about the FARC.

Yes. Because in the cities they don't feel directly touched by the war. They think it is something remote, in jungles. They don't realize that all the displaced people come to the cities. When you see someone mugging someone else on the public transport system, it is because he didn't find employment and he is probably a displaced person. But people's lives will definitely improve when we end the war.

I'm going to have to be like a teacher and explain the benefits of peace.

Will the government start talks with the ELN?

I think that the ELN must come into the process. It is one conflict, and we have to end it as one conflict… I want total peace for Colombia.

The FARC is worried that the US Department of Justice is trying to prosecute some of their leaders. What happens if you reach an agreement with the FARC and the Justice Department is still asking Colombia to extradite the FARC leaders?

Of course, no FARC leader will give up their arms to end up in a life sentence in a US prison. But I think the US government will help find a solution. I am very grateful to the US for its support of the peace process.

Direct in the sense that USAID [the US Agency for International Development] is already helping us plan for the post-conflict. The US has not been directly involved. I decided this peace process will be between Colombians. We don't have mediators.

We have facilitators and guarantors. They are Cuba and Venezuela because the talks are taking place in Cuba. Venezuela helped a lot, as did Chile and Norway.

Do you want your legacy to be that you ended the conflict?

Peace with social justice. Colombia — four years ago — was the second-most-unequal country in Latin America. Today, we are no longer the second. We are average.

But we have a long way to go. I use President Kennedy's phrase a lot: Nobody can be rich surrounded by extreme poverty.

You want to lift people out of extreme poverty?

Yes. So far we have been quite successful. Two-point-five million people have gone into the middle class. And 1.3 million have been taken out of extreme poverty. My plan is to eradicate extreme poverty in 10 years.

Nine per cent of our population is still living in extreme poverty — about 4 million people.

You are in favour of the decriminalisation of drugs.

I am in favour of something new. What we have been doing for the past 40 years has not worked. I am in favour of finding a more effective way to take drug money out of criminal hands. It may be decriminalizing. It may be more of a health approach. If you find someone with marijuana in the street, instead of putting him in jail, you send him to a rehabilitation centre.

In the past 40 years of this war on drugs — quite frankly, we have not won.